Celebrating Over 12 Months and 20,000 Kilometres of Van Life Around Australia

Van life equals freedom. I’m not just talking about the freedom to physically move from place to place, but the mental cleanliness to go without feeling like you’ve left something behind. Over the past 12 months, I’ve realised how little I need to get by, and to tighten up on unnecessary spending. 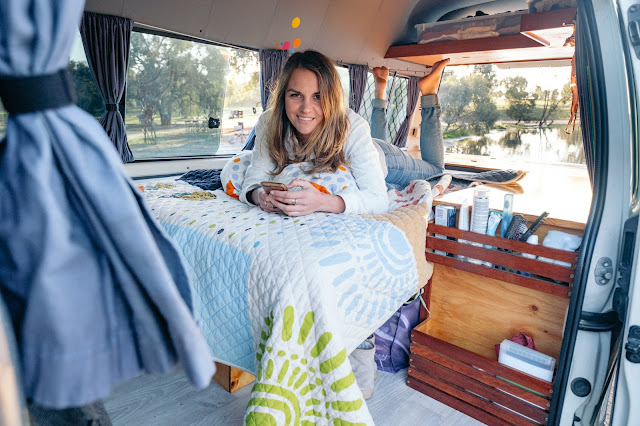 As a result of living minimally, I often find myself with more time than I know what to do with—which is probably unusual to most. A lack of TV, home to clean/decorate or garden to tend to, has driven me to find new ways to spend my time and feel purposeful.

Living without four-walls makes you susceptible to all sorts of interactions with strangers; It’s an addictive lifestyle if you’re a people-person. Most days the people I meet and the opportunities I receive remind me there’s a lot to be grateful for in Australia. I’ve realised when I’m being open and generous, people welcome me into their lives (and often homes) with open arms. I’ve been emotionally moved several times by the stories and acts of strangers I now call friends. For these reasons and several more, it’ll be difficult to one day return to house life.

What sort of van is it and why did you choose it?

It took me around 6 months to find one with low mileage and the specs I was after. I didn’t want a model produced any later than 2006 because the windows are fixed, meaning you can’t get fresh air into the van while you sleep. It only had two previous owners; it was first owned by a Catholic Church so I like to think it was blessed. When I bought it, it still had a few passenger seats in the back. They weren’t difficult to remove and the existing fit-out was very basic.

Can you actually live out of it?

Totally! But you need to have the right mind-set for it; it’s not for everyone. While it’s pretty spacious, there’s no toilet; so if you’ve got an issue with pooing in public toilets, you’re going to have a problem. I recently bought a camp shower which runs off 20v, but the weather’s been too cold to give it a whirl. It’s pretty basic and I don’t have a shower tent or anything, so it’s only good for remote locations. Right now I’m resorting to wet wipes in between showers.

I have two marine batteries which power my 55L fridge and all electrical sockets, including a DC invertor which allows me to charge my laptop. The batteries sit under my king-single sized bed and get charged up whenever the motor’s running. The flexi solar panel I bought for about $300 has rarely seen the light of day because I’m on the road every few days, even if it’s just to go get groceries. I’m told it takes about three days for the batteries to run flat.

Where do you sleep at night?

It really depends on how I’m travelling. If I’m just stopping in for a night or two, I’ll assess whether I think it’s safe enough to park in a residential street. If I decide to stay longer, I join the largest community page on Facebook and ask if anyone will let me park in their yard and use their bathroom. I’m always surprised by how many people respond and how well things have turned out. I usually offer to pay $50 a week or there about, but most of the time I’ve stayed for free or in exchange for help around the house. Most of the time I stayed with young families with children.

Where have been your favourite places so far? 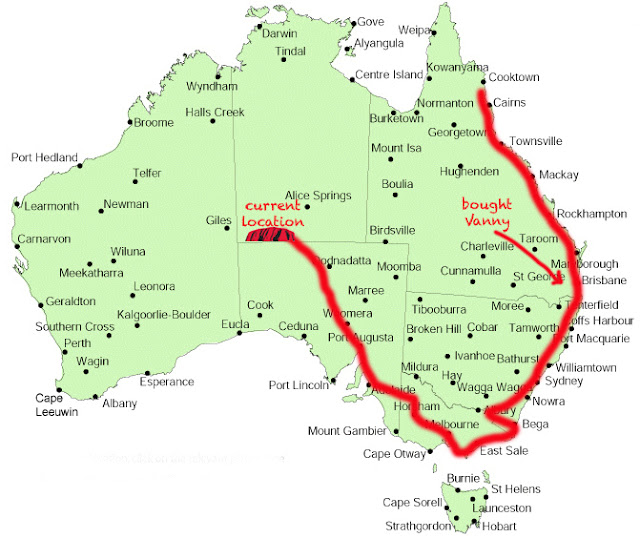 As you can see from this map, I've still got a lot of Australia left to see! I purchased Vanny in Brisbane and drove her up to Port Douglas where I was living at the time. I slowly made my way down the east coast and reached Melbourne early January 2018. By the end of this month (August), I'll have arrived in Darwin. Thus far, the following four places have been stand-outs for me:

Port Douglas- I’ve been visiting since age 17, so aside from being a stunning beachside town, I’ve developed countless great memories there. I stayed at Dougies Backpackers for a month or so when I first bought the van. The groundsman let me use some hand tools to take out the seats and fit the flooring. I lived in a glamping tent for the duration—it’s upper half was constructed out of heavy-duty mosquito net and fairy lights hung from the roof—it was magical. The main street of Port Douglas is always bustling and most of the restaurants serve high-quality seafood. My favourite restaurant Salsa (just off the main street) makes the best prawn linguini and chocolate soufflé.

Noosa- I don’t think you can find a better headland walk in Australia! The trail between Noosa Heads and Sunshine Beach is spectacular. I lived in Sunrise Beach which was about a 10-minute drive into town, and a 2-minute walk to one of the quietest beaches in the area. I rarely found myself down at Hastings St (the main drag) because I adored the quirky vibe of the local strip in Sunshine. There’s a handful of cafes and a fantastic fish and chip shop there. If that wasn’t enough, not too far down the road there's Peregian Beach, a funky little beach town chocka-block with boutiques and bakeries.

Port Macquarie- I only stayed in this town a couple of days because I was on a tight schedule. Despite the fact, I liked it so much I noted it down as a place to return to in the near future. There was a lot going on around the foreshore, with a public mural running the length of the river, alfresco dining everywhere and a lively skate bowl. We listened to music coming from the pubs while watching dolphins play around the boats. There was great atmosphere from morning until night.

Coober Pedy- This place is the hidden gem of Australia, quite literally. It’s where miners come to make their millions from striking opal and the residents live in underground dugouts. The people are so rich in character and culture. During my week stay I went to a Greek Hall party, has dinner in a local's dugout and was taken on two private mine tours.