The Best Photographic Landscapes Along the Great Ocean Road

Some of Australia’s most scenic landscapes are situated in Great Otway National Park and along the Great Ocean Road. Our day trip began in Forrest (surrounded by forestry) and ended in a large coastal town called Warrnambool. 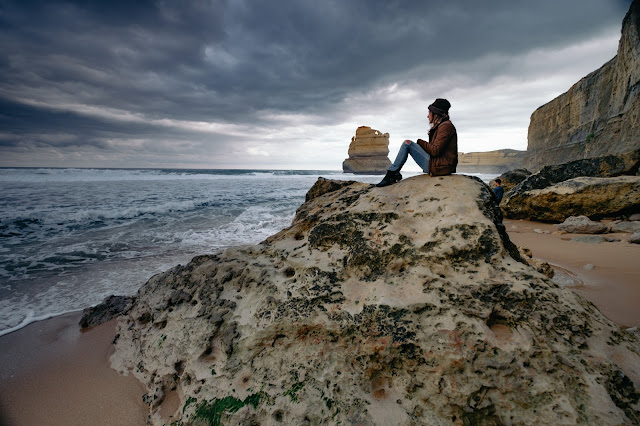 Inland from The Great Ocean Road 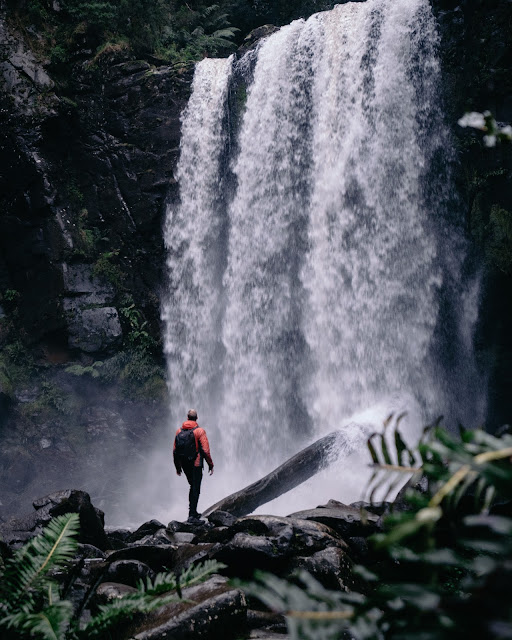 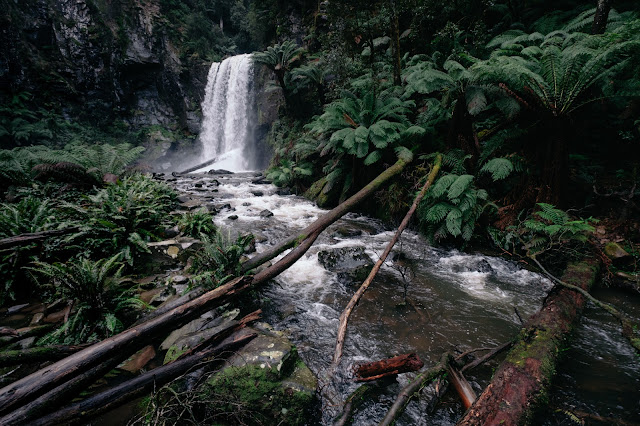 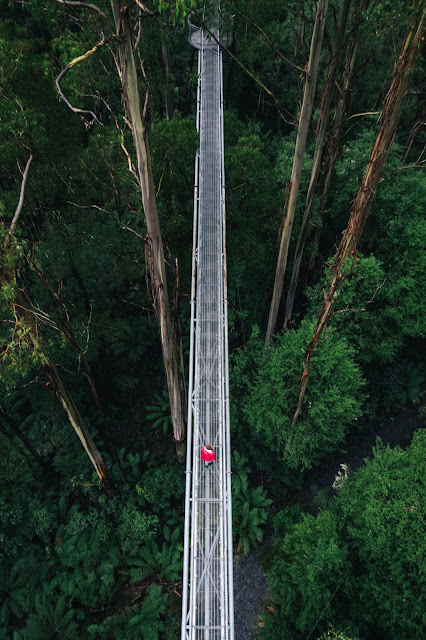 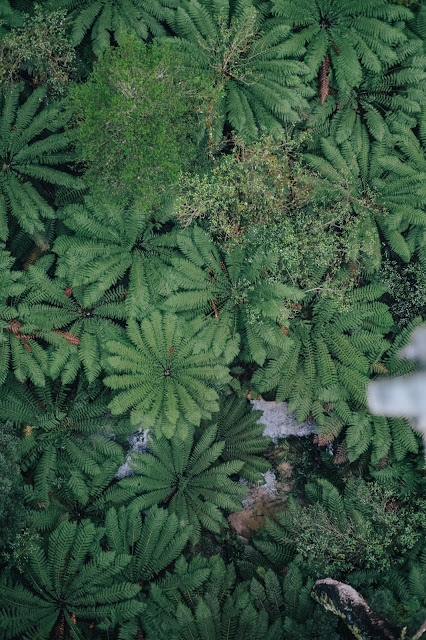 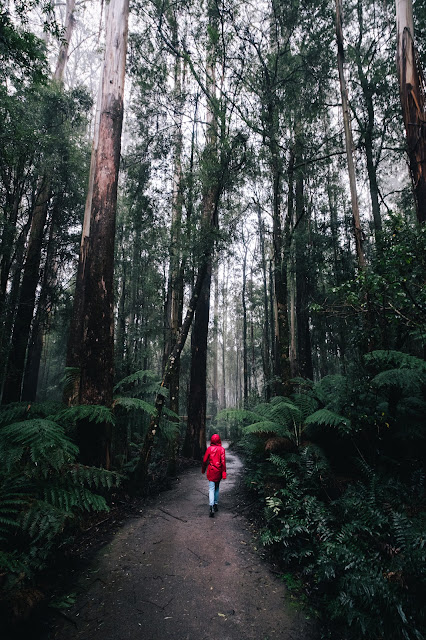 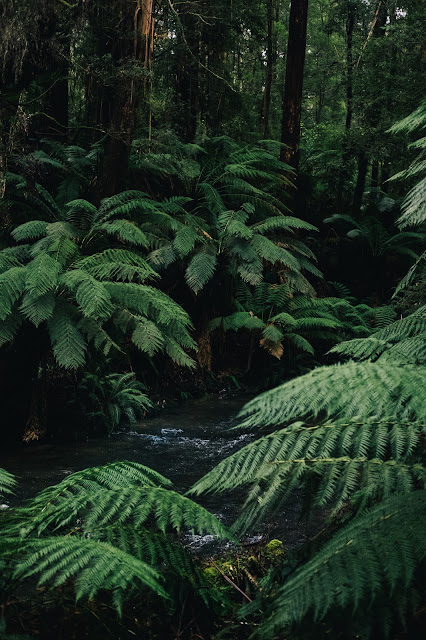 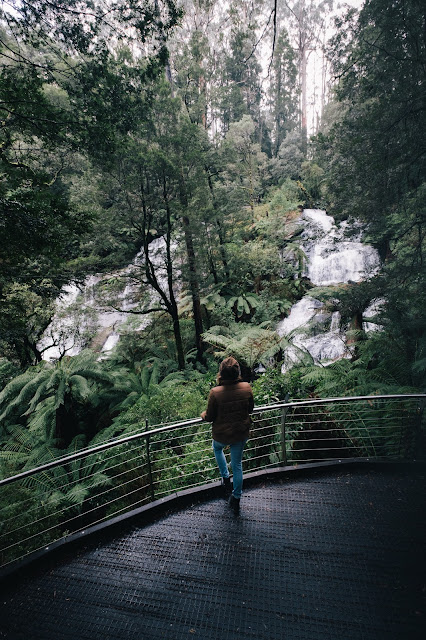 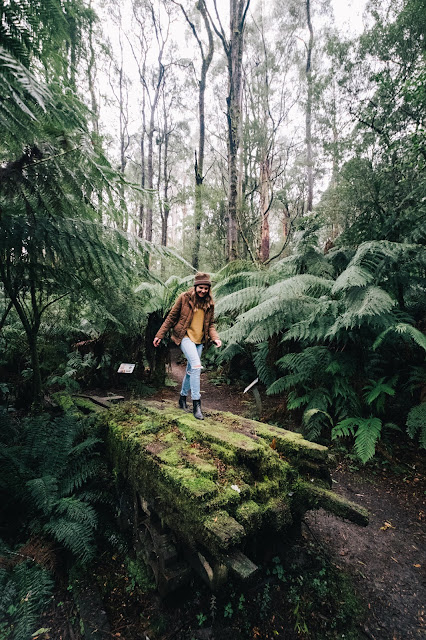 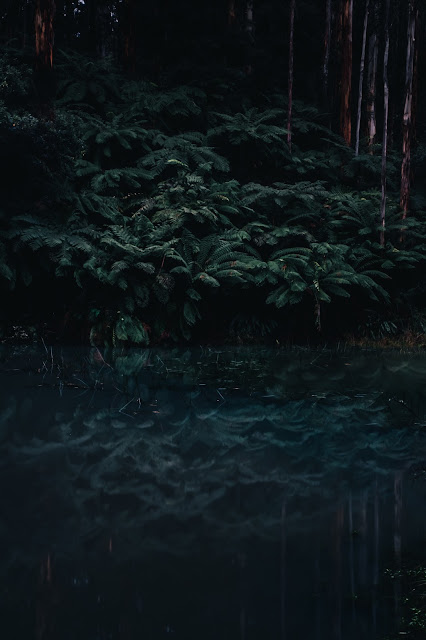 On The Great Ocean Road 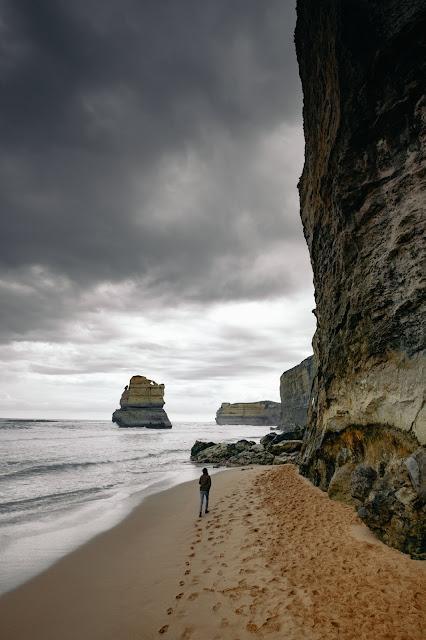 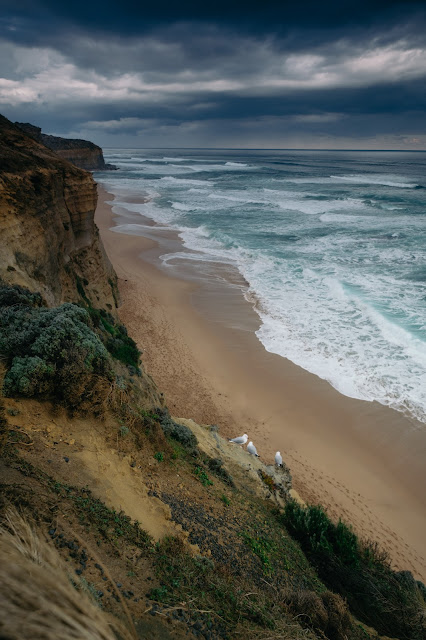 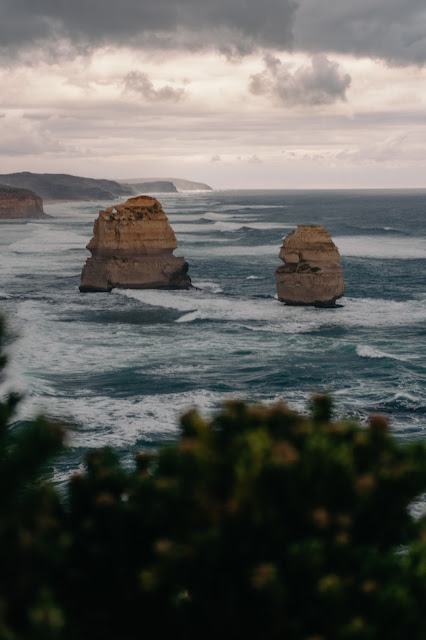 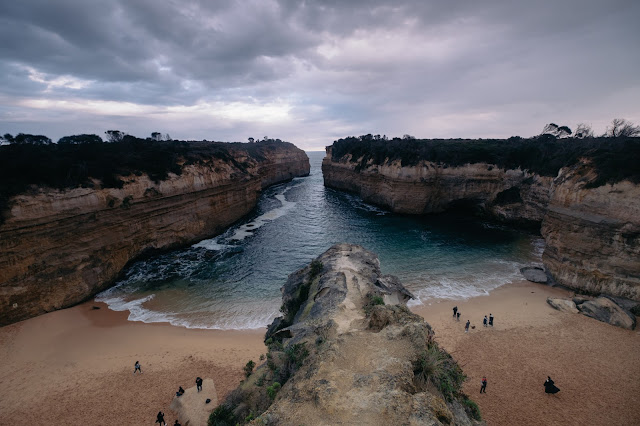 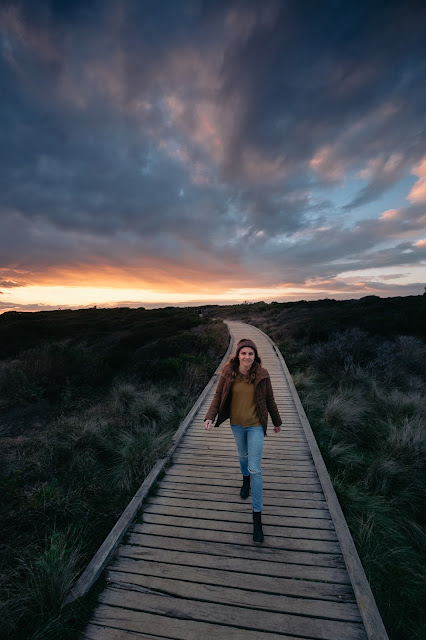 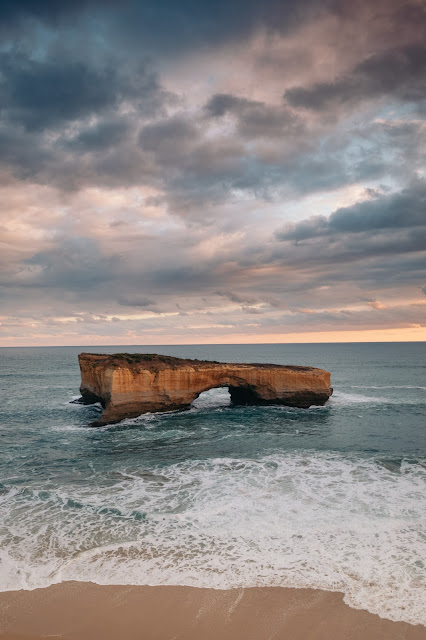 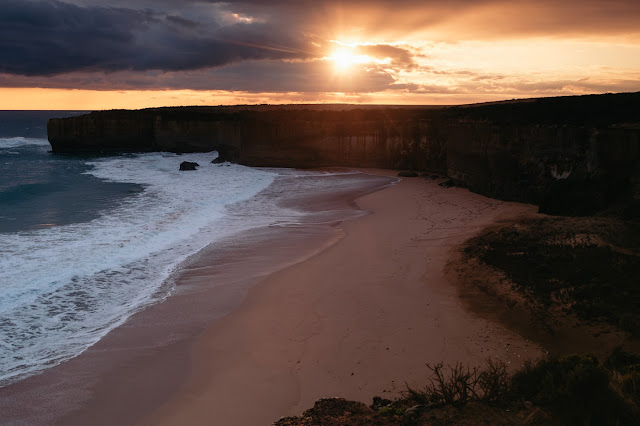 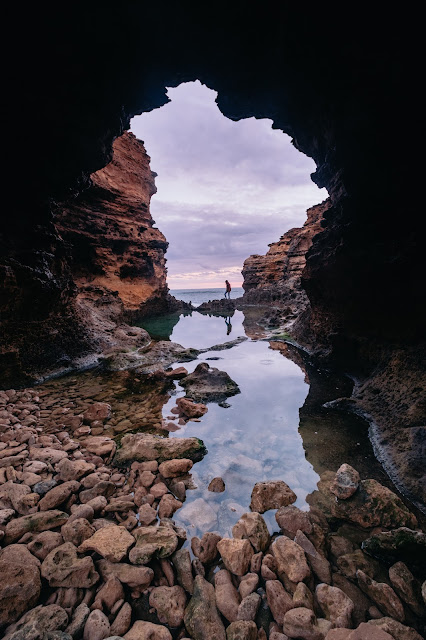 Waking up in a steam train carriage built in the 1926 was a hoot – or should I say toot?! The room we slept in contained an engine (or at least that’s what I think it was), which was built into the floor and enclosed by a sheet of glass you could stand on. The number of windows and lack of insulation throughout the wooden carriage made it rather chilly, but like a fashion conscious teen, I was willing to overlook comfort for style. As I walked to towards the kitchen, I peeked into the smaller sleeping quarters to admire the original fixtures and layout; there were two wall-hinged single beds with overhead luggage racks and plaques displaying passenger information. I made myself a cup of tea and sat in front of the fire while we planned our day.

There were three waterfalls in close proximity to each other, so we thought we’d start by checking out Hopetoun Falls. We reached the viewing platform after a 20-minute walk from the carpark. There was a significant distance between the waterfall and the platform which made it difficult to take a decent photo. While Nate jumped the barrier and went rogue with another bloke to take a closer look, I chatted to his girlfriend who was from New Zealand. Out the corner of my eye I could see the boys taking photos of each other standing metres away from where the water came crashing down. They both returned slightly wet and muddy, but thankfully unscathed. The bloke asked Nate to email him the photos they took before heading off. It made me wonder how many times people had requested that of Nate in the past and whether he tires of it. If only they were lucky enough to have a photographer as a travel companion.

The walking track leading to Triplet Falls was much nicer than Hopetoun, despite the waterfall being less “fally”; the water gracefully cascaded down three lumped heaps of stone which looked like steps you could walk up if the taps were turned off. Some of the trees we saw along the way were ginormous. It was a shame to see several names graffitied into their trunks. I think we spent more time admiring things along the trail than the waterfall itself. As the sun began to dip, we hot-footed it back to the car in an attempt to arrive at Lake Elizabeth before sunset.

Unfortunately, it was dark by the time we got to Lake Elizabeth. I was hoping to be there at dusk as I’d been told it’s the best time to spot platypus. The sky was blue as we wandered a few kilometres into the forest. I wanted to turn back but Nate was adamant about reaching the lake. By the time we arrived, it was so dark I could barely make out the shapes a few metres ahead. We stood silently while Nate took some long exposure shots.

As Nate was leading us back through the trail towards the car, I shone my phone’s torch on the ground ahead. I was looking down when he stopped all of a sudden, causing me to walk into the back of him. “What? What?” I hissed out of fear. “I dunno,” he said, still stopped in his tracks. Dozens of little lights were shining ahead of us. At first Nate thought it was a person messing with us, but it turned out to be a rock covered in glow worms! The specks of light were intermittent, but continued to flicker regardless of whether we made noise or got close up. Nate tried to take a few photos but said they came out as white dots on a black background.

When it came time to check out of Steam, I realised I’d gotten so caught up in adventuring, I forgot to run an errand for the owner of the property. She had given me an envelope containing money to pay a man called John for stacking a bunch of firewood under the train. While Nate packed his things into the car and took some last minute photos of the train’s exterior, I went in search of John the local. I knocked on the door of a house that matched the description I was given, and thankfully a smiley man named John answered. He shook my hand and told me it was “a bloody shame the weather wasn’t nicer” for us. Contrarily, Nate thought the rain and fog was perfect for shooting photos.

We departed Forrest and headed for a look out point on the Great Ocean Road called Gibson Steps. Someone tipped off Nate that it was the best spot to take photos of the 12 Apostles. Having stopped further down at the regular spot afterwards, we both agreed the tip paid off. There were far less people at Gibson and you can walk onto the beach, causing the two visible apostles to look so big and stark against the sky. The looking platforms up the road were crowded with people taking selfies and I felt as though I was staring at a life-size postcard rather than the real thing. This feeling carried on as we stopped at London Bridge for a brief look.

Our last stop was The Grotto, which was probably my favourite view point along the coastal tourist trail. As soon as we arrived, my eyes were fixated on the reflections of the sky and jagged rocks surrounding the still body of water. Just beyond the glass-like pool was a ferocious swell of water. I enjoyed watching it try to disturb the peace by crashing into the rock wall. Only a few faces rotated in and out of the spot while Nate and I spent 30 minutes hopping across rocks and taking photos.

The next morning, we both woke to our alarm for the first time in two weeks; it probably had something to do with sleeping overnight in our respective vehicles. I was so keen to get going, I didn’t even change out of my thermals until we arrived at our destination, Logan’s Beach Whale Watching Platform. We thought it was promising to see an old man in the parking lot with a pair of binoculars around his neck. I began to shiver as a walked up the boardwalk towards the pinky-purple horizon. I only lasted about five minutes before retreating back to the car to venture into town for a hot drink. I was surprised to see Nate’s car pull up to the cafe just minutes later. As we sipped our drinks, he told me he was snubbed by the binoculars guy when he tried to make friendly conversation. Maybe he could’ve done with a hot drink too.
- July 17, 2018
Email ThisBlogThis!Share to TwitterShare to FacebookShare to Pinterest
Labels: 12 apostles, forrest, gibson steps, great ocean road, hopetoun falls, lake elizabeth, loch ard gorge, logan's beach, otways national park, photographic landscapes australia, the grotto, triplet falls, warrnambool
Location: Great Otway National Park, Cape Otway VIC 3233, Australia