I wasn't really sure what to expect when it came to driving between Alice Springs and Darwin. There was a concerning lack of enthusiastic remarks coming from travellers we met heading south. Before we left Alice I started psyching myself up for 10-hour days of driving to avoid stopping at towns which were considered "dangerous". I'm glad curiosity got the better of us and we decided to stop at most of the towns and roadhouses off the highway, otherwise we would've missed some nice little spots.

Here's what we'd advise others to do based on what we found:

DO stop at Daly Waters 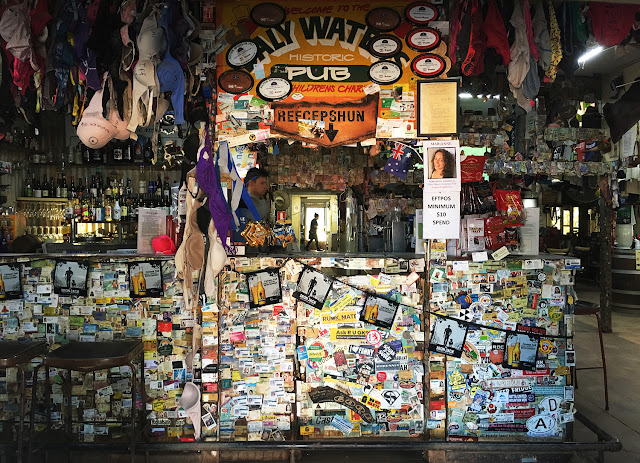 Why? Daly Waters Historical Pub is as quirky as they come. Everywhere you look you’ll see mementos left by past travellers and Australiana paraphernalia. There are bras hanging from the ceiling, hundreds of ID cards stabled to the bar and a shrine of broken flip-flops used to decorate an outdoor awning. Each night they do a big BBQ cook up of beef and barra. Somewhere between 50-100 people were there the night we stopped in. Aside from a table of blokes that looked to be on a footy trip, we were probably the only ones under 50; it didn’t matter though, everyone was having a good time listening to a country singer and making the most of happy hour. 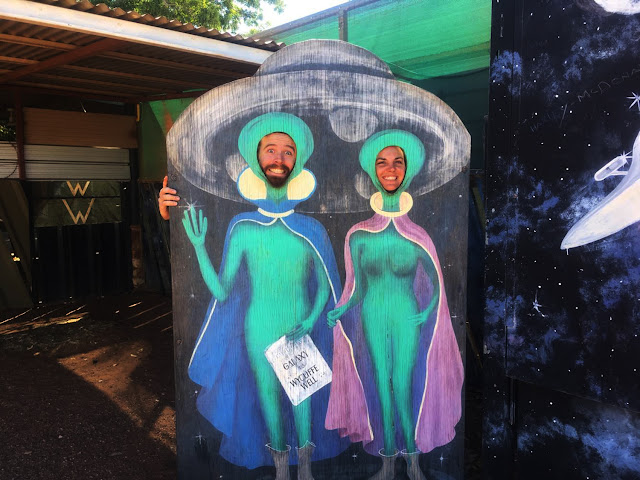 Why? We were excited to visit what’s coined the alien sighting capital of Australia. However, there’s nothing more to do here than read some laminated articles on the wall. We were expecting to meet someone who claimed they saw an alien, or at least tell us some good stories about what had occurred in the area. The man behind the counter of the general store (linked to the caravan park) told me the business had changed hands several times and there were no long term residents. What remains is a store full of made-in-china merchandise and some weathered sculptures of green aliens out the front.

DO stop at Devil’s Marbles 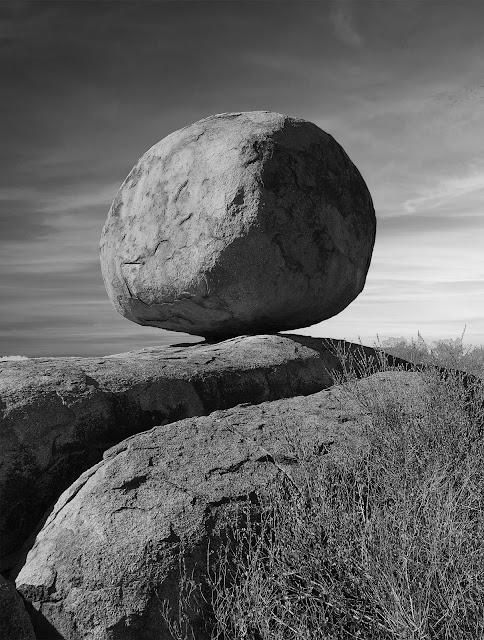 Why? You can wander around for a few hours pondering how hundreds of round rocks ended up in a desert. Or you can read the information boards and scrub up on your understanding of geology! There’s a camp site ($3.50 per person so practically free) situated in the middle of the outcrops which means some seriously good views at sunrise and set.

DO stop at Tennant Creek 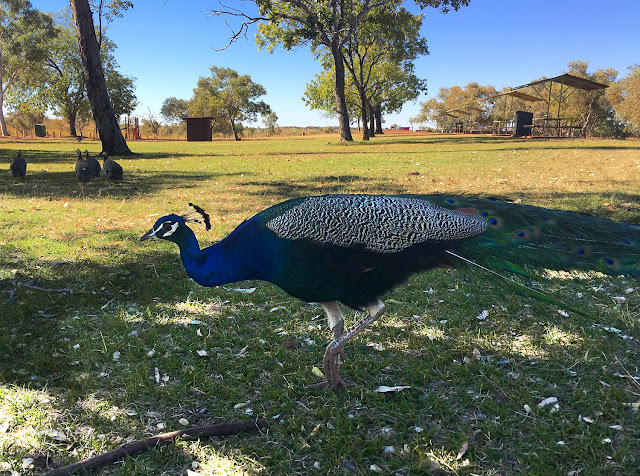 Why? Tennant Creek can’t seem to shake the bad press, but one thing to be celebrated is Lake Mary Ann, a few minutes drive from the centre of town. Perhaps it’s the unexpectedness of the place that makes it so great. As you roll into the carpark you’ll be greeted by a dozen spotted turkeys, a handful of chooks and two peacocks (one male with the beautiful feathers!). A local told me people dump them there after deciding they are too loud to keep as pets. It’s sad, but the birds seem well fed and are admired by all the visitors who stop by. The male peacock was so chilled he let me sit right next to him to take a photo.

DO stop at Mataranka 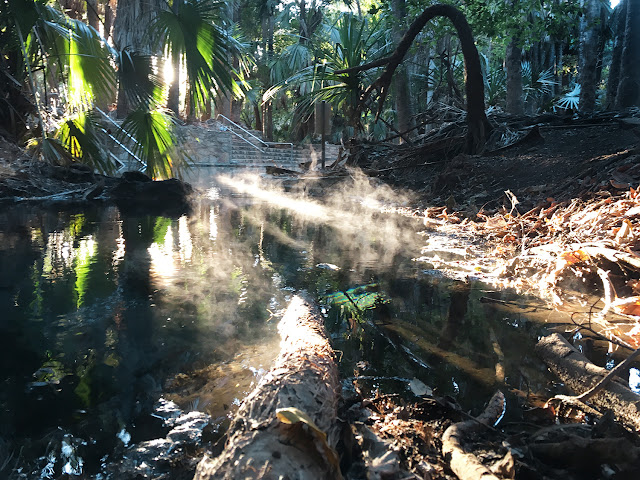 Why? There are two places not to be missed there—Bitter Springs & Mataranka Thermal Pools. The aqua blue water is naturally heated and both are situated among beautiful terrain—think palms mixed with huge gum trees. Bitter Springs is prettier out of the two, but Mataranka is cleaner and easier to swim around in because the water doesn’t move as fast. Lots of people had pool noodles which was a smart idea but ruined the aesthetic of the place. When we arrived at the thermal pools in the afternoon there were about 40 people squished in together. Rather than add to the cesspool, I woke up around 6:45am the following day and went for a 50-minute swim all on my own. It was heavenly! 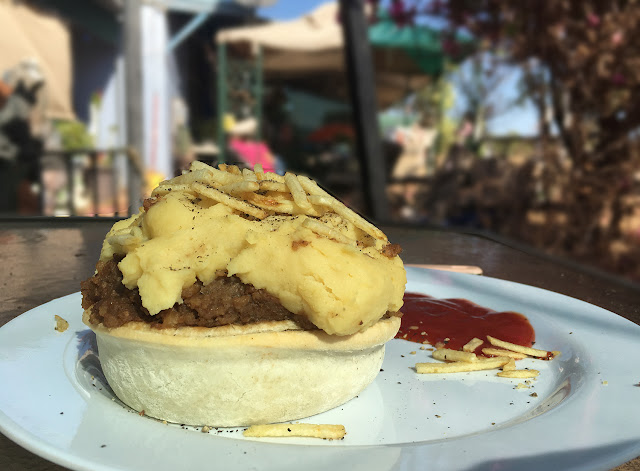 Why? In December 2017, Paddy Moriarty went missing in his hometown of Larrimah, at the time a population of 11 people. He and his dog are yet to be found. The news reported that the owner of Fran’s Devonshire Tea House, situated opposite Paddy’s house, was his rival and that he regularly defamed her pies. We decided to stop in at her establishment and order a pie for ourselves. Dan claimed he couldn’t remember eating something so vile and complained he felt sick for the remainder of the car ride. Since then, several people have jokingly suggested where Paddy’s remains may be. I recommend you check out some of the Google Map reviews.

DO stop at Katherine 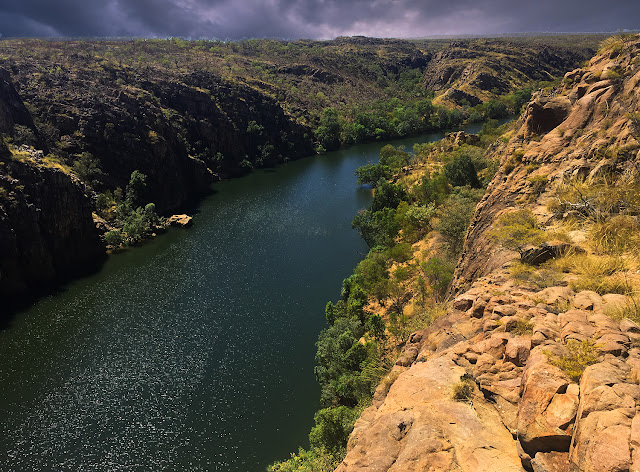 Why? To walk some of the trails along Katherine Gorge. Our time was limited so we only walked to the first look out, which was about an hour loop around from the carpark. I’d love to get back there to do a 3-4 day hike which passes by areas which are safe for swimming. Apparently a crocodile was pulled out of the first swimming point earlier this year.
- September 09, 2018 No comments:
Email ThisBlogThis!Share to TwitterShare to FacebookShare to Pinterest
Labels: alice springs, central australia, daly waters, darwin, devil's marbles, katherine gorge, larrimah, mataranka, road trip, tennant creek, wycliffe well
Location: Mataranka NT 0852, Australia

Exploring the Surrounds of Alice Springs

Alice Springs is situated in the most central region of Australia. It used to be the town everyone flew into to visit Uluru, but then the big red rock got its own airstrip. Tourist numbers are declining as a result, which is a shame considering the town’s people are some of the friendliest we’ve met whilst travelling through the Northern Territory.

While there isn’t much to do in the town of Alice Springs itself, it serves as a great base to go and explore the surrounding natural landscape. Here’s what we found: 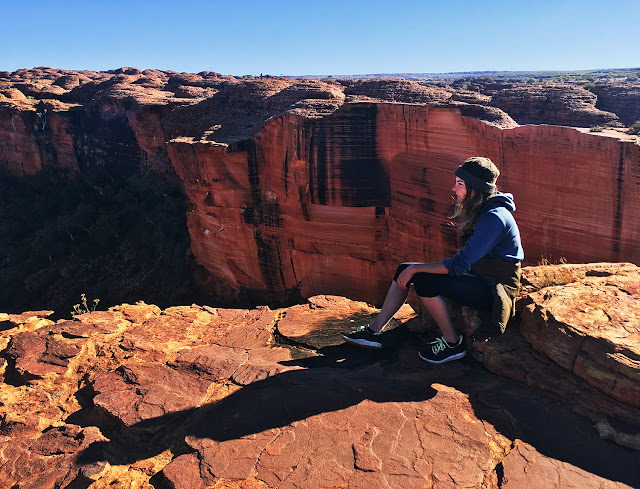 We completed the Rim Walk through Kings Canyon in about 2 hours, despite the signs advising us it’d take between 3-4. We overheard a tour guide explaining it’s the second largest Canyon in the world. I’ve never visited a canyon so wasn’t sure what to expect, but the rock formations were interesting and diverse. Toward the end of the walk you can stand next to a shear drop off point. It looks as though the rock has been carved away to reveal multiple hues of pink, orange and brown. It was my favourite spot to stop and consider how it was formed and appreciate the vastness of the place. 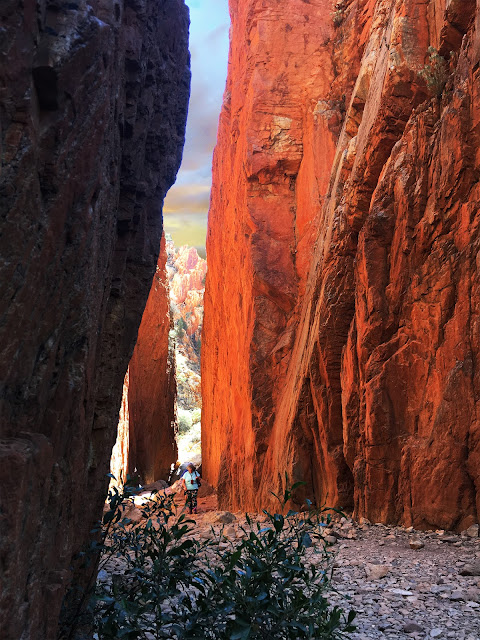 A chasm is defined as a deep fissure in the earth's surface. Because I didn’t know this I had no idea what we were going to see when we decided to drive out there. We were told to make sure we reached the chasm by midday, because that’s when the sun stretches through the crack and lights up the space usually filled with darkness. Whilst paying our $10 entry fee we learned there was a free tour starting at 11 o’clock with a local indigenous man named Kevin. We were so thankful to have him guide us along the track because he pointed out half a dozen bush foods we would’ve otherwise walked straight by. Even though the chasm was half lit by the time we entered, I was still freezing because of the wind. We didn’t stick along long but it was a nice place and the tour made it a well worth experience. 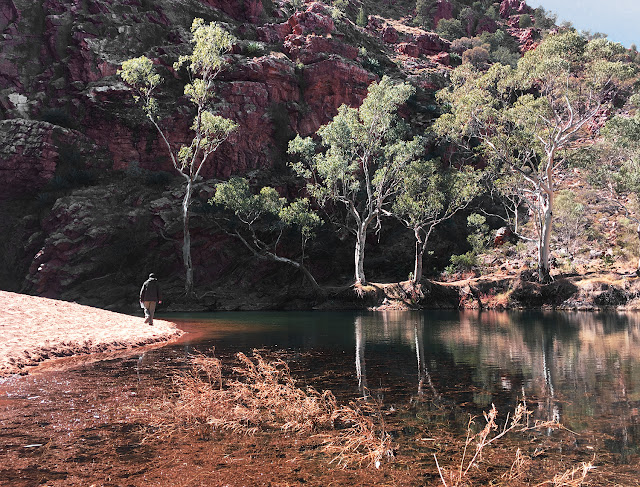 I was surprised this place wasn’t more popular because it looked like heaven to me. I sat on the bank watching tourists dive into the icy water, breaking the stunning reflections of the overhanging gum trees. There was a great energy in the air as comradery formed between those who dared to jump in. One couple brought down a blow up kayak which allowed them to explore a small channel beyond a rock wall. Despite sharing the space with a dozen or so people, it was very peaceful and we could’ve stayed for hours had it not been late afternoon.