Visit the Hidden Town of Tenkawa in Japan 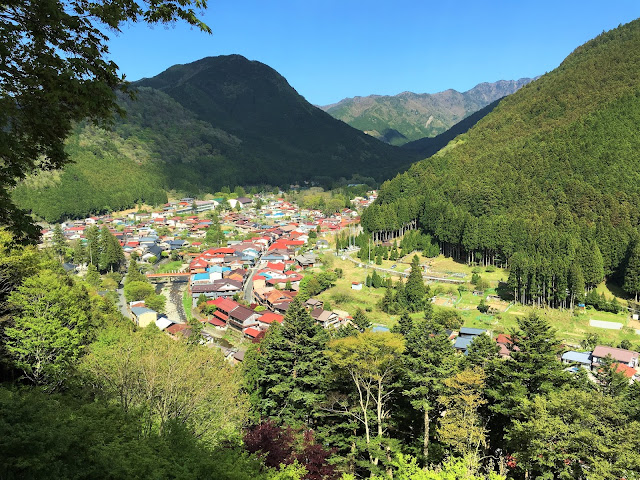 Hidden in the crevasses of its mountainous surrounds, Tenkawa Village is one of the few holiday destinations Japanese tourists have managed to keep under wraps. During weekends and public holidays, nature-lovers come in droves to sip from the sparkling fresh Dorogawa Springs and watch the sun blanket the colourful roofs from one of the spectacular viewing platforms above.

Despite being only a 2-hour drive south of Nara City, Tenkawa Village manages to remain off the must-see list of major English travel guides. Crowded pine mountains remain unspoilt and relatively uncharted; a huge draw card for those who want to enjoy a peaceful atmosphere whilst working up a sweat from steep inclines and untended terrain. If you chose to diverge from one of the trails leading to a marked destination, expect to run into many a spider and hanging obstruction—literally. However, if you are the adventurous type, charge through the cobwebs and don’t look back, for you’re likely to stumble upon small clearings and gain a golden view over the village. While you’re unlikely to require walking poles, wear solid footwear, for you’ll be met with some pretty hazardous tree roots and hills requiring some tricky footwork. 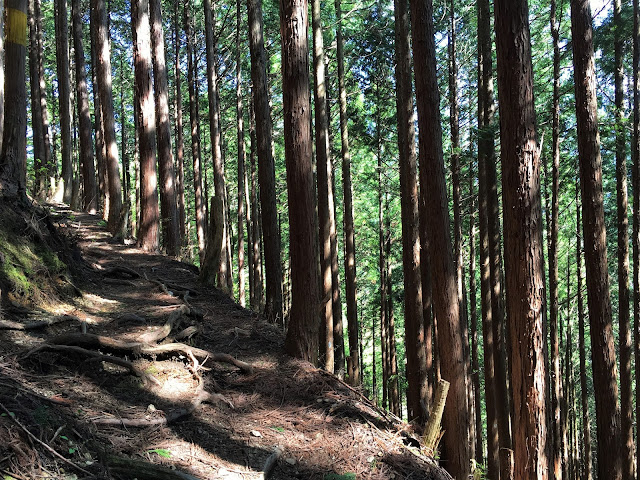 For a small fee, you can enjoy the view without a red face or sticky shirt by riding a motorised rail-cart to the observatory. Although you’re likely to spend more time queuing for a seat than it would take to make the journey several times over, it’s a novelty to wind through the forest with a different perspective (sitting a metre or two higher than the heads of those opting to hike up). There are two rail-carts operating at mountains roughly 1.5 kilometres apart. Both rides take approximately 10 minutes and stop at the entrance of small limestone caves. Those willing to don a white helmet and pay roughly 500 yen can enter the damp cave on foot and weave through it’s small, colourfully lit spaces before exiting from a near-by hole. 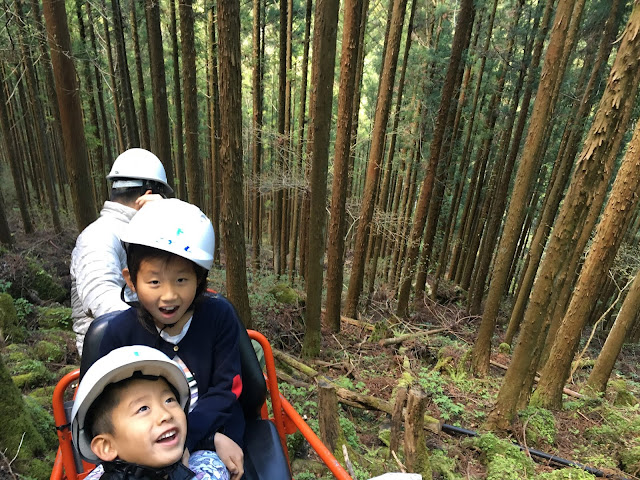 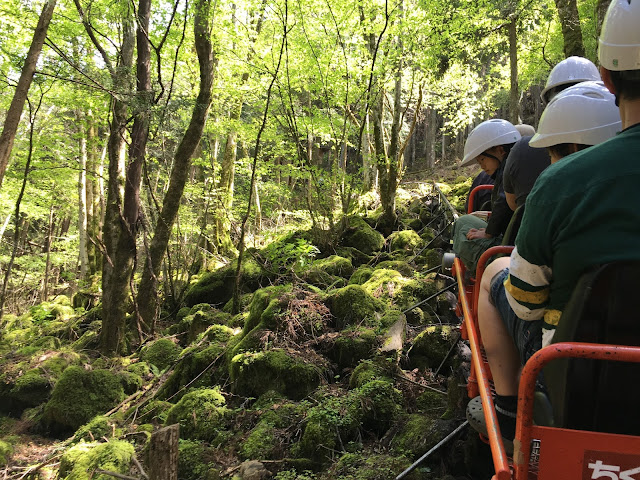 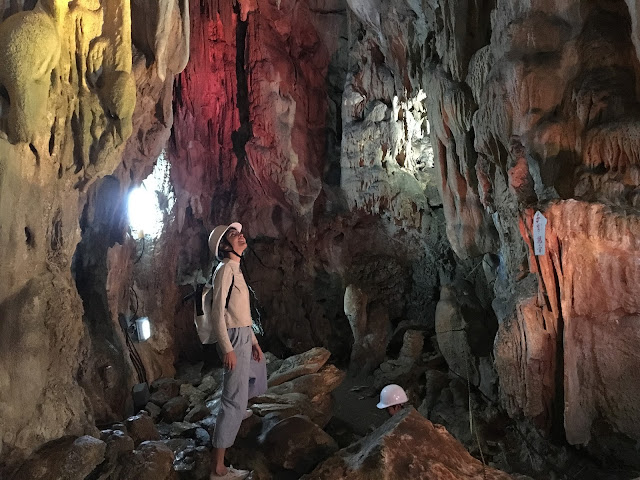 If you’re compelled to ride the motor-cart, I’d recommend taking the one which leads to Goyomatsu Shonyudo (Goyomatsu cave). Consisting of four singular padded seats and no restraints, there’s a thrilling element to descending backwards down the hill. Contrarily, the rail carts leading to Menfudo Shonyudo are enclosed and rooved and have been fabricated to resemble logs.

By choosing to walk up to Menfudo caves, you’ll see where the path extends off in other directions. One of which leads to a suspension bridge over-hanging a flowing river bed. Whilst bouncing your way across the bridge, you can watch the sparkling fresh spring water cascade below. As long as you’re not too scathed by the light swaying of the bridge, I’d advise double backing and retracing your steps back down the hill. That way you can exit the mountain via the grounds of a beautiful Buddhist temple; rather than onto some lacklustre residential backstreets far from the other attractions. 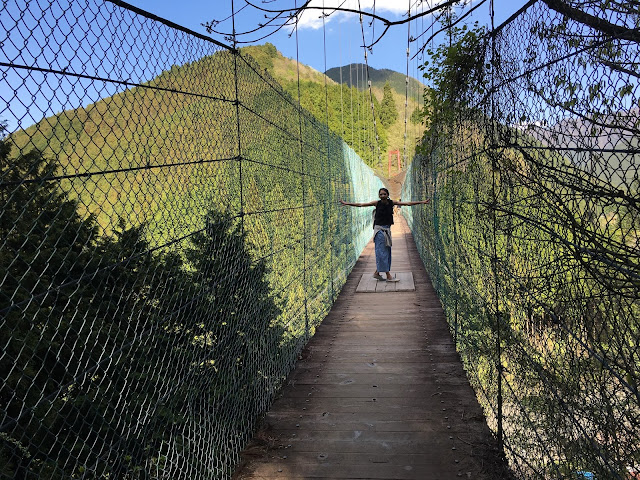 Spend some time wandering around the temple grounds before exiting through the dirt carpark. Depending on the season, you may come across some temporary stores selling local produce such as wild honey or tinned boar. A short walk up the hill (walking away from the main river) you can find a small establishment which invites you to roll up your pant legs and hand-catch yourself a fish. As I visited during summer, it was off-season, rendering the small fish almost impossible to catch even with a net. A few keen fishermen were attempting to snag a morsel for lunch by attaching fish roe to their unweighed lines. I gave them an A+ for optimism, cheerfulness and character, as I thoroughly enjoyed observing their humorous attempt to fish and speak English. 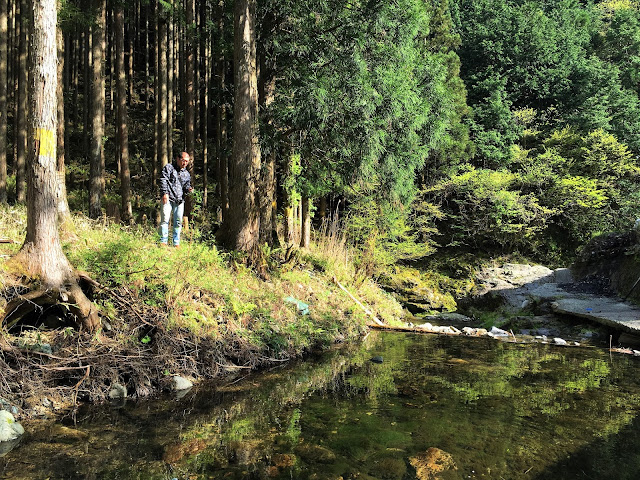 Whilst Tenkawa is accessible by train, I highly recommend hiring a car and spending a full day there. Alternatively, you could stay at one of the lodgings situated in the village, however, even the most basic establishment charges upwards of 10,000 yen per night. I recommend staying in Asuka which is a reasonable one-hour drive away. Situated in the old area of Asuka lays a transformed ryokan-style guesthouse with cheap dormitory accommodation. Surrounded by rice paddies and veggie patches, the grounds and scenery possess both candid charm and numerous impressive historical sites. Keep an eye out for a future post dedicated to highlighting the area of Asuka.

How to reach Asuka: From Osaka-Abenobashi Station, take the Kintetsu-Minamiosaka Line (bound for Yoshino) to Asuka Station (approx. 1 hour)