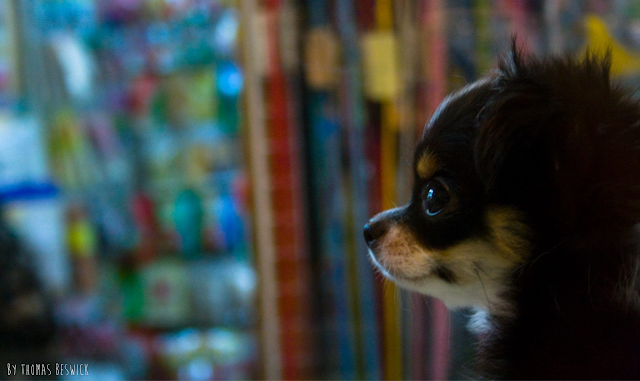 Those who’ve been to Japan are likely to agree that the nation’s people are amongst the most outwardly caring people in the world. Even if they don’t speak English, they’ll go out of their way to help visiting foreigners; often putting a total stranger’s needs before their own and expecting nothing in return.

They reserve an even more intense display of kindness and adoration for babies and all things fluffy. It’s not uncommon to hear women screaming ‘kawaiiiiii’ in one of Tokyo’s many parks before spotting a designer dog stroller with mounds of fluff protruding from the carriage. With matching bows and booties, these dogs are pampered more than most children I’ve taught in Australia. With names like Hoshi (star) and Momo (peach), they regularly escort their mums and dads to cafes and boutique shopping strips. In restaurants they patiently sit on laps under heightened tables and regularly get passed around by patrons and staff like it’s visiting hour at the nursery ward.

Having observed these sorts of friendly, heart-warming interactions daily for the past six months, I’m baffled by the lack of compassion for the welfare of hundreds of animals in Tokyo’s pet shops and animal-themed cafes.


Are these besotted upon dogs the same puppies being
featured in sterile boxes in shop windows? How many of them start life like
Annie, only to be picked out by saviour billionaires like Daddy Warbucks? It’s as though until the animals are named, they are nothing more than a kawaii (cute) window display for the inner-city foot traffic; as if partisan’s have exhausted their efforts caring for their own animals and playing the perfect host to international visitors. If there are existing standards in place to force these establishments into the 21st century, the administrator certainly isn’t as rigorous as the school-boy packaging my stationary at Tokyu Hands, or the N’EX ticket inspector, or even the man who checks that the bottle caps have been removed from the plastic bottles on garbage day...
And the gloom doesn’t even stop there.
Beautiful exotic marine life are subjected to swim in barren display tanks; the hand-scrawled price on the outside of the glass being the most decorative element afforded to them. Birds, cats, snakes and lizards are purchased to serve as tourist attractions in cafes. With foreigners paying for pats and selfies, these animals receive the opposite end of the wick to their pet shop counterparts when it comes to the privilege of companionship. The café environment is so far removed from most of the animals’ natural habitats, those drawing large crowds are likely to suffer sleep deprivation and over-bearing amounts of noise and light.

"I’ve never heard an owl demand a strong morning expresso because he didn’t get much sleep at night." 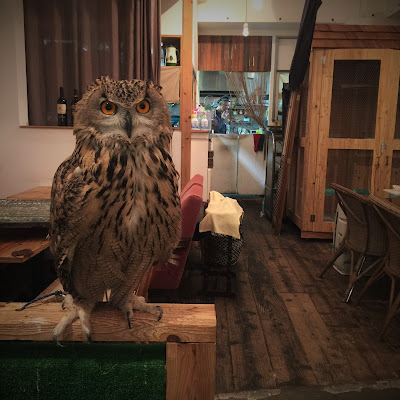 Last week I visited an owl café in Shibuya to see what all the fuss was about. There’s roughly eight bird/owl cafes listed online, but most of which are located in Akihabara (also home of the human café captives known as maids). There was an A-frame on the sidewalk specifying that owls could only be viewed between 5-11pm, however, this was clearly not the case as I spotted several birds perched upon wooden frames inside. Upon entering, I was shown a price menu offering customers the option to stay 30-60 minutes. I picked 30-minutes for 1,500 yen which included one drink (approximately $18AUD). I ordered a latte and sat down while seven owls (6 species) squawked, nattered and flapped close by my table. The smallest owl of the bunch, a tawny, involuntarily became a table guest after the owner tied her to the wooden centre piece.

My latte arrived shortly after; garlanded with tin foil over the mug. I wasn’t sure whether this was to prevent added extras from dropping in or to keep the beverage hot in case I wanted to pay an additional 500 yen for the bird to have an ‘arm ride’. Apparently I was lucky to have found this café, as most owners charge guests to take their own photos. An owner dressed in an owl scarf, owl tights, owl apron and adorned with owl jewellery taught me how to pat the owls on their beak and feathers so that they wouldn’t bite. Even through a limited exchange of English, it was evident that these people were very fond of their birds— despite whether they identify themselves as animal exploiters or are even fully aware of their business’ implications. When I asked the male owner about each owl, he enthusiastically told me details of their age, species and how he obtained them. He ensured me that they get some sleep through the day by being placed inside a black-clothed cage at the back of the room. Despite his attempts to highlight the team’s effort to manage the birds’ welfare, watching them tied down to furniture whilst attempting to fly away has been etched into my mind. During my short stay, the largest of the owls tried to take flight several times, only to be whipped back to their post and dangle from a foot-noose whilst trying to re-establish their footing. The fighting amongst one another (likely brought on by frustration) and the heavy sound of beating wings left me deeply saddened hours after I’d politely thanked the owners and exited through the sunroom facing the busy side-street. Guilt has been nesting inside my mind ever since, as I recognise that it’s curious foreigners like me who sustain these horrible businesses.


The array of animal cafes have perhaps become somewhat accepted as a unique quirk to Japan’s already bizarre and fascinating culture. However, it’s disturbing that despite there being far more pet shops than cafes, they are less discussed or put under the microscope. I’m yet to visit one of the 23 wards in Tokyo that hasn’t got at least one tiny pet shop situated close to the major train station. Due to the shortage of space, it’s common to see shelving not much bigger than a microwave oven mounted against the glass shop front displaying fluffy kittens and puppies. Each box has been decorated in a minimalist fashion—six faces of acrylic plastic and a blanket for its one resident. Each day I walk past an aging Pomeranian who sometimes spends 14 hours a day in the window. When he eventually disappears, I’ll spend the next few weeks wondering whether he was lucky enough to break into the café scene. 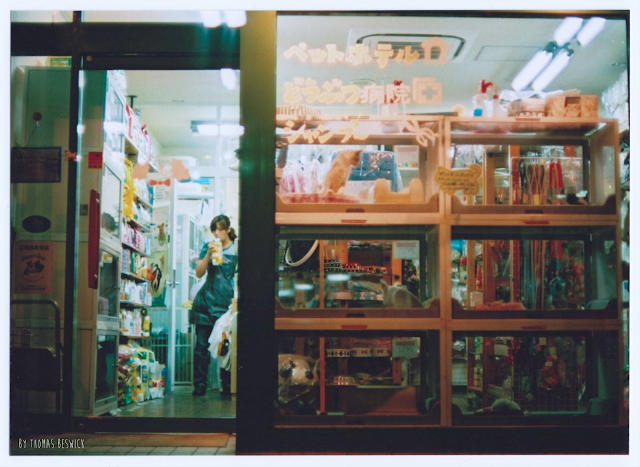 Included in this horror series are the marine animals, possibly drawing the shortest straw of all. Although I’m not familiar of the buying/selling laws when it comes to exotic sea creatures, it seems Japan is all for supplying exquisitely colourful eels and dinner-plate sized turtles as family pets. I felt compelled to enter a store in Setagaya after setting eyes on a motionless fighting-fish laying sideways in a glass jar in the shop window. Surrounding siblings in their identical glass jars looked like they were mourning their losses or suspected they were next. A beautiful leaf-green frog with brown spots sat in a fogged up plastic cube as if someone had locked him inside an indoor heated swimming pool centre. As I walked the aisles of the make-shift store, things looked even more dire for the black and white striped eel, the pig-nosed looking turtle and the little neon cow fish skimming the surface with his antenna. Surprisingly, the luckiest ones seemed to be the most average of the tropical fish, sharing a tank lined with small grey pebbles. Up until this point I’d never considered buying a fish, let alone starting an aquarium encompassing every creature featured in store…minus the fighting fish. 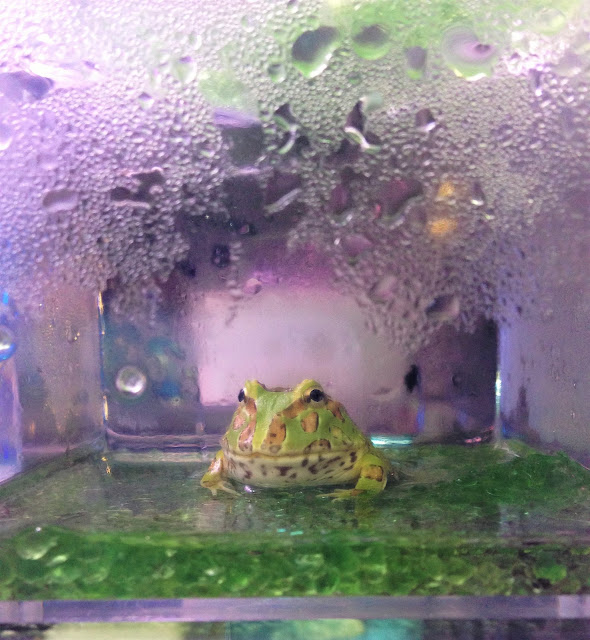 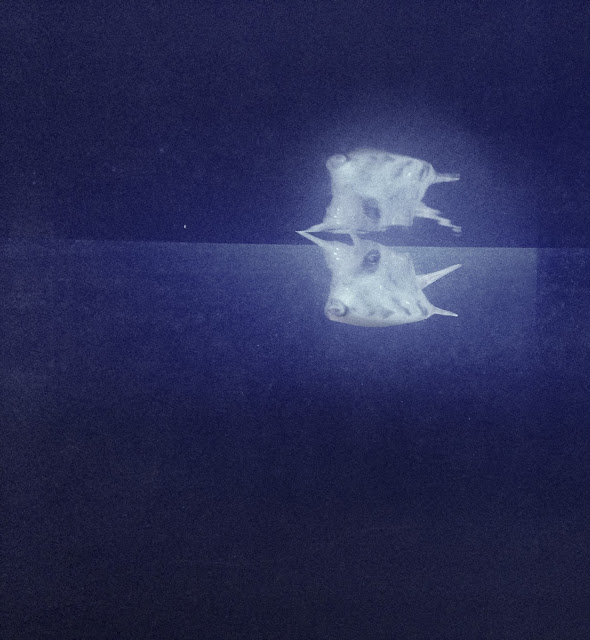 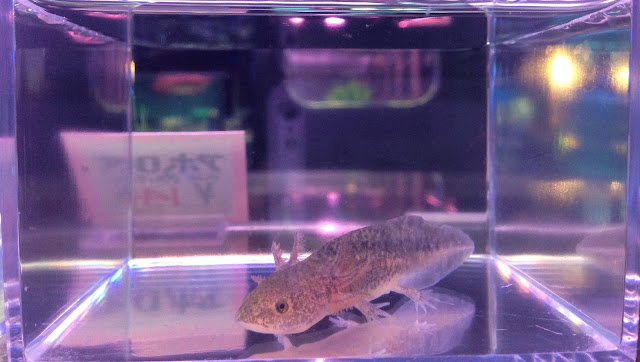 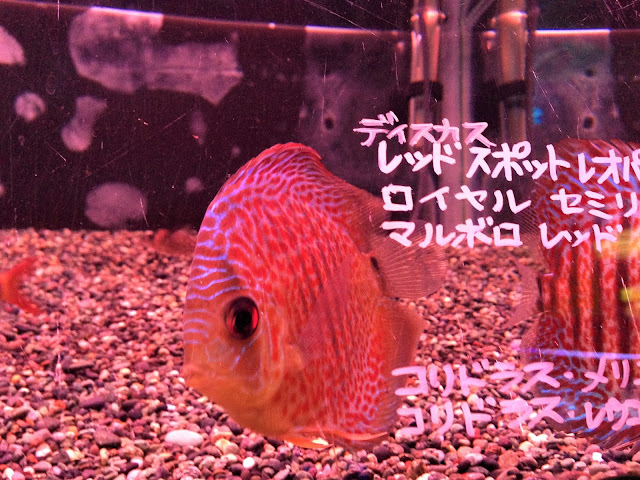 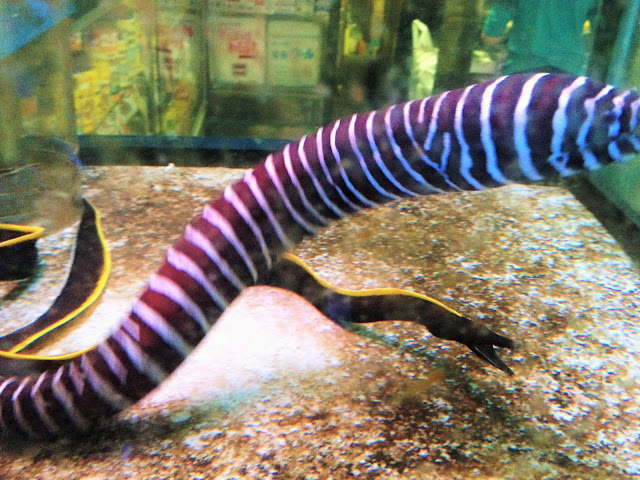