I met ranger Skye on Groote Eylandt in April 2014. She is now a dear friend of mine, despite our interests and skill-set being worlds apart. She is the epitome of a fearless woman; coolly handling animals which most of us would balk at upon a glance. She thinks sitting between the shrubs in bushland late at night is peaceful and boasts about getting to spend a great deal of her working week springing from rock to rock in search of furry friends.

I find Skye's passion for wildlife conservation and dedication towards scientific research inspiring and fascinating. When I manage to pin her down in between her laborious trapping schedule, I find myself asking her 21 questions in a childlike manner. She is so knowledgeable about a variety of animal species and patiently answers all my questions in layman's terms. For this reason, I thought I'd formally ask her some questions that I could share with you.

Skye was kind (and silly) enough to invite me out to check the traps one morning. A trip that usually takes her an hour or two solo, took roughly 4 hours with me in tow. I trailed behind her as she effortlessly bounced from rock to rock like a billy goat while I shakily crawled on all fours and scooted down-hill on my bum. Although Skye was too polite to say anything when I got in the car that morning, I think my jeans and leather boot attire gave her a good indication of what she was in for.

After a tiresome, semi-dangerous experience (in my opinion, not Skye's) I said to myself, "thankfully there are all types of people in the world" because unlike Skye, I could never do such a physically strenuous job.
Please take your time to read the below Q & A session I had with Skye only weeks before departing Groote Eylandt. I sure learnt some new things and I'm sure you will too! 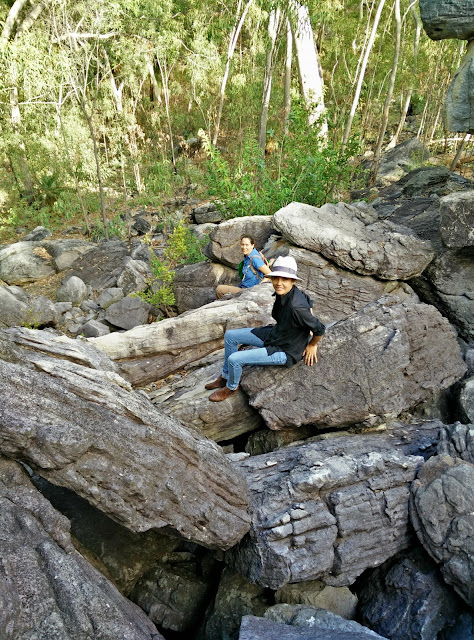 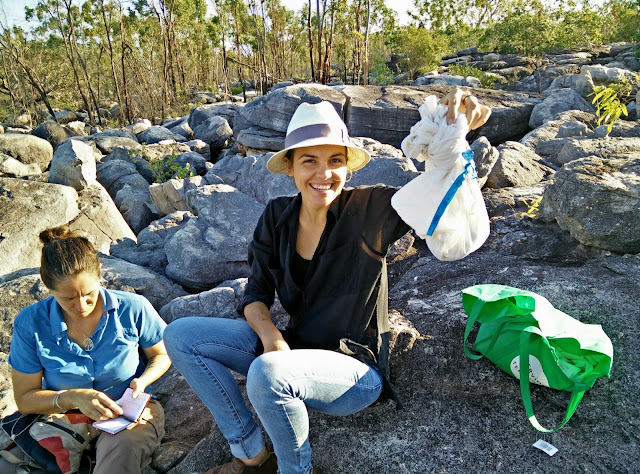 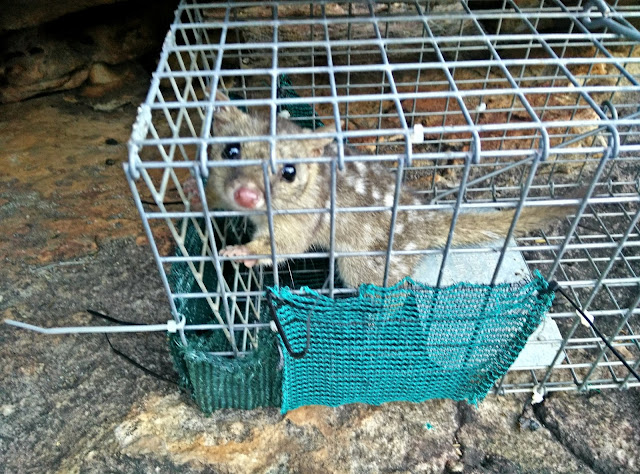 What did you study at university?

Zoology and wildlife biology as an undergraduate. Then I did my PhD in ecophysiology [where you look at how the environment effects the behaviour, appearance & physiological traits of animals] and evolution biology. My post-doc is in on ecology [how animals interact in and with their environment].

What are you doing here on Groote Eylandt?

I am the manager of a northern quoll research program that is taking place on Groote Eylandt (GTE). My team and I are looking at the general population, breeding, how they move and where they move within their habitats. One of the main reasons for conducting the research on GTE was to look into the life history traits of the northern quoll as they are semelparious (animals that die after a reproductive bout), for these males that is a year. This only happens to the male quolls and they are one of the largest marsupials that do this. Even more intriguingly, northern quolls living on mainland Australia are known to show reduced signs of semelparity (surviving for two years).
As a vast manganese mine has been operating on GTE for over 50 years, the location also lends itself to look into how the mining operation may be effecting the northern quolls’ health. 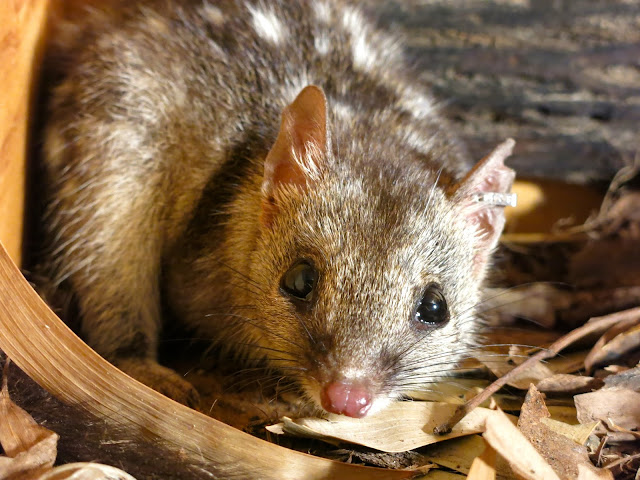 While northern quolls are an endangered species, they have a healthy population on GTE. We study quolls for science sake; to understand how and why things have evolved the way they have over time, as well as how this thriving population interact with their environment to guide conservation management decisions for this species.
Another important aspect of our job is to work with the Anindilyakwa Land Council (ALC). We show the rangers how to trap animals for record keeping. By involving the local community, we hope that they will be able to continue monitoring the quolls’ health and population long after we’ve gone. It’s important to give them the skills they will need to be able to manage the animals on their island.

Very good question…because they are an endangered species. There are numerous on island, they are cool, they are a key stone predator (meaning they are at the top of the food chain here on GTE). They are semi-arboreal which means they can live on the ground and in trees. They quickly manoeuvre around their environment and they are cute. 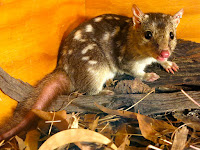 What significant discoveries have you made?

That the quoll population here is greatly impacted by weather patterns. Because of it being really dry this season, the number of quolls have significantly reduced.
Generally, male quolls only live for one year and females three. However, we recently learnt that males have more potential to live onto a second year if they lose their testicles.

Perhaps one of the strangest discoveries is that females can have babies from multiple fathers growing in their pouch. This can occur because breeding happens over two weeks and the females usually have multiple encounters with different males. As it takes a few days for the egg to be fertilised, the female can be breed with up to five fathers. Twenty-one days later, she can give birth to her babies from different fathers.

Due to the low quoll population on the mainland (in comparison to GTE), males are living for two years. On GTE they ‘root themselves to death’ but on the mainland they can’t do that because of the low numbers.


Who funds your research and what will they do with the results?

Our research is partially funded through the ALC to help manage quoll health and population. We also get financial assistance from the University of Queensland and the Australian Research Council which is a federal organisation.
Our results are gathered for both practical and theoretical purposes. They are used to gain a greater insight into ecology and evolution. What we learn can be passed onto others to help build the bigger picture. The project we are currently working on will inform others on how to develop management plans to help dilute mining impacts on wild life.

Best and worst part of your job.

Best: I get to be outdoors working within conversation which I am extremely passionate about.

Worst: All the admin work that needs to be kept. There’s a lot of if!! For example, the OH&S involved and budgeting for such lengthy projects.

What animal do you find most fascinating?

Elephants because of their memory capacity, their social system because they have a matriarch and their family is so important to them, they are so massive and they have a trunk. It’s freakin’ weird and cool. They are the evolutionary link back to pre-historic times which makes them even more fascinating.

Lizards because there is such a large variety of species. They have cool behaviours. For example, they can’t produce their own body heat and therefore rely completely on their environment. They are so ancient in appearance. I think they probably look similar to what they were like back in the dinosaur days. I find lizards fun to work with.

What do you find most appealing about Groote Eylandt?

The landscape- the colour of the water is amazing. The wildlife is amazing because it is so pristine. I love the GTE community. I have enjoyed learning about the indigenous community. It’s pretty unique and special. Social events in Alyangula are spectacular as the whole community gets involved-it’s awesome!

A male quoll can produce the equivalent of 15kg of force with their bite.

The male quoll has as two-headed penis called the biphid penis.