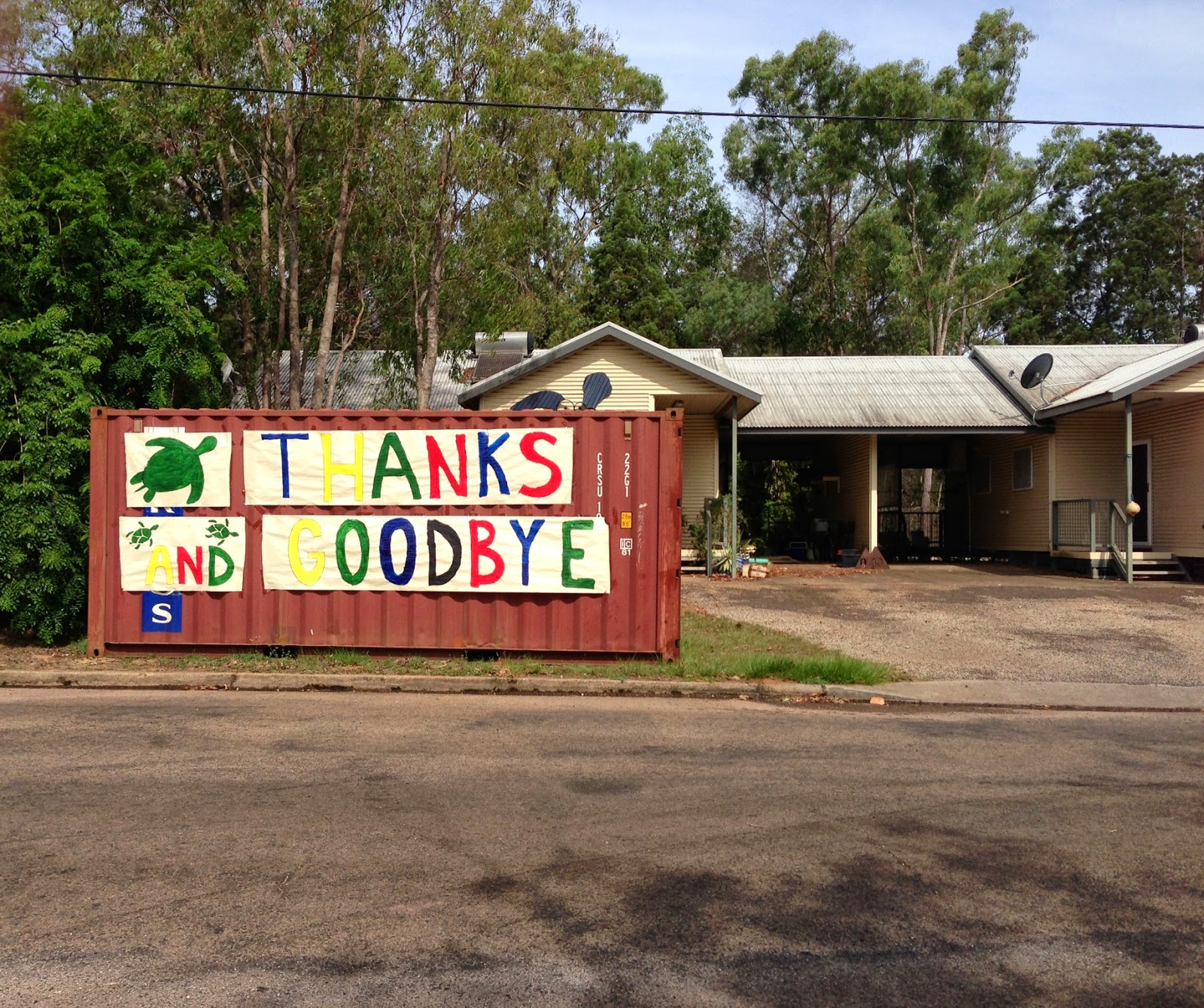 Bet you read the heading and thought I was leaving the island...

No...Not I...just all the other teaching staff. It's crazy to think that I am now one of the longest serving teachers at my school. Only three others (from preschool to Year 12) are staying on in 2015.

I took the above photo on the last day of school for 2014. The painted banner was an unusual amount of effort made for the departure of yet another island resident;saying goodbye apparently becomes tiresome after a while. Shipping containers regularly pop up all over town and garage sales occur every weekend without fail. The fact of the matter is, no one or thing (except the Anindilyakwan people) is permanent on the island. Most people live in undecorated houses with neglected gardens for this fact; there are lots of houses, but none to call home. Each new year they debate whether it's time for their kids to experience 'the real world', or check to make sure that the absurdity of paying $7.00 for a loaf of bread hasn't caused them to develop a twitch every time they reach the checkout.

The teacher who awoke to the farewell banner worked at Angurugu School (Indigenous community school). He is taking 'study leave' to travel overseas and is unsure whether he'll return. Study leave is an incentive delivered by the Education Department to keep remote teachers working in the Territory. It's clever but flawed at the same time. After a year or two it seems most teachers begin to crave normality and the comforts of suburban living. But there's something keeping them from hasty booking the next flight home at the end of the school year. Every time they consider kicking the can they ask themselves "If I've already sacrificed two years of my life to living remote, then what's one or two more? They start to ask themselves this when they know there's such an appealing reward for patiently staying put for just a few more years (four in total). The reward is six months of paid 'study leave'. I am apostrophising 'study leave' because currently the department doesn't require any formal documentation to prove that the leave is in fact spent studying.

"So how is the incentive flawed?" you may ask. It sounds like all parties benefit. It creates more consistency in schools and teachers are rewarded for their longer-than-average stint in the NT. The only problem is, that once they've gone on 'study leave', there's no expectation that the person will return after the six months (or 12 months if opting for half pay). So, in short, not many return and the school loses yet another well-informed/connected teacher and the cycle starts again.

What do you think about this issue? Please feel free to comment below.

Onto a completely unrelated topic, some friends and I went crabbing last weekend.
Mud crabs can be caught in baited pots or with spears. My friend Chris travelled to the mainland and used pots whilst we looked like warriors with our homemade spears. As the tide was far out, we walked around the edge of the croc inhabited mangroves looking for movement beneath the sand. With stingers, crocs and mighty claws in the water, some might say we were mad to risk our lives for a bit of adventure and a feed. 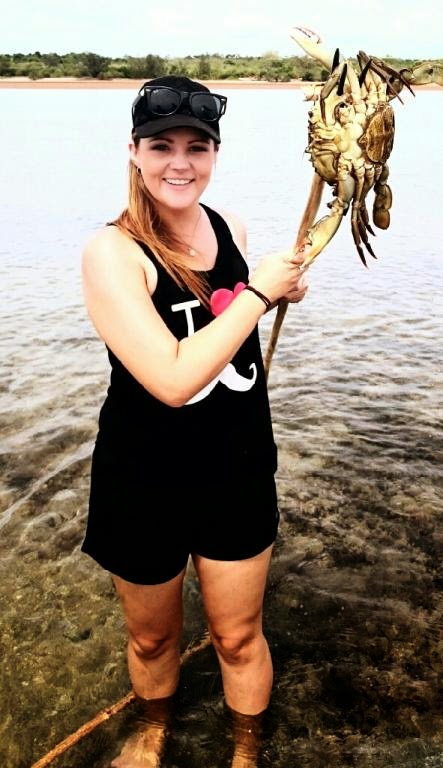 But as you can see by the photos, the risk paid off and we managed to spear six large crabs (five more than Chris and his crab pots). I can't claim to have been a huge help as I piked well within the first hour. The water was hot and I was drenched in sweat. I kept falling past knee depth each time I took a step in the soft sand. It was painful and frightening as my ankles scrapped against the sharp coral on the bottom. I'd brace myself with each step as I knew I'd receive a nasty red scratch. After what felt like two-kilometres battling through quicksand (realistically more like 200m), I went to lick my wounds under a tree and watch the others. I was secretly entertained watching Lisa head back on the same path as me, causing her to snap her spear and loose her crab in the process. I sat under a fragrant tree and the sand surrounding me started to shift. Thousands of tiny hermit crabs had the same idea as me and sought refuge from the scorching sun. We'd stupidly went during mid-day which meant that the sun was ferocious and unforgiving to white fellas. We returned home sweaty, mildly burnt, itchy and cut up. We all whinged as we sat around waiting for the two large pots of water to boil. As soon as we laid eyes on the reddish orange shells, we started to 'oooo' and 'ahhhh' in delight rather than 'ouchhhh' and 'errrr' about our first crabbing experience. We had a feast that night and I must say I've never eaten such sweet, delicate crab meat, or any crustacean for that matter. 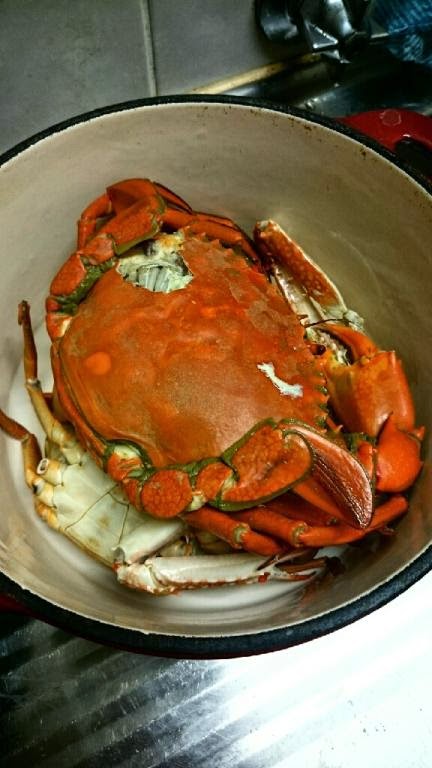