We Raised $10,000 for Relay For Life by Opening a School-based Cafe

"Thank god it's over!" was the only thought I managed to conjure up at 10am last Sunday morning. No. I was not on my way home from the pub or a regretful sleep over. I had just completed Relay For Life (RFL). For those of you who’ve never been roped into a RFL event, put simply, in the weeks leading up to the event you raise money with a team of 10 people. On the day of the event, you complete a 17 hour walking/running relay around a public oval. Awards are handed out for the best team costume, most money raised and the highest lap tally. The money raised goes to the Cancer Council.

My team, the 'Blister Sisters' was made up of teachers who work at the school. When our team captain suggested we take advantage of the school’s new commercial kitchen to open our own café, excitement tripped out sense and we all committed to 4 weeks of trading; amounting to 5 hours of our time each Sunday. This didn’t include food preparation or shopping and restocking consumables. Thankfully, I’d adamantly opted out of the baking, instead offering to be trained up as the barista. 'Coffee shop Erin' gave me the Coffee 101 the day before the grand opening and surprisingly I had the frothy milk down pat within a few goes. My cappuccinos were plausible which was imperative, as I'm known to be quiet the coffee snob around town.

Each week we had a consistent stream of familiar faces coming to mingle around the outdoor picnic benches and help support our efforts. We sold homemade cakes, slices, sausage rolls and many more buttery, sugary decadent looking items. Although we had nine of us dedicated to specific roles (dish pig, table service, milkshake lady, counter lady etc.), we felt under the pump for at least two of the three opening hours. The ‘Sisters’ were the only ones happily wiping the menu from the board and mopping the floors for the last time come our final week of trading; all the café patrons suggested we keep the service ongoing. A sarcastic “yeah sure” was the unanimous response. We managed to fake grin our way through the experience and on the upside, our takings amounted to over $1,000 each time. Not bad for a bunch of teachers who were noticeably inexperienced in hospitality work.

Our team ran numerous other fundraising activities such as sausage sizzles and a hand car wash. However, I managed to worm my way out of those. Perhaps I was let off the hook because I’d agreed to have a face painting stall operating on the night of the RFL event. My little ‘$5 a face’ venture was hugely popular and by the following day, all little tired faces were covered in distorted, smudged versions of Hello Kitty and Spiderman. I’m not sure what my efforts equated to in money value but it kept me busy well into the night. By the time it was my turn to run, I was welcoming the opportunity as I felt like a broken record telling the kids to “look up”, “shut your eyes”, “head up..head up…head up please” and “keep still”. I think I was like the grumpy cat version of a face painter and if the kids hadn’t of known me, they’d be calling me ‘the scary lady’.

The above youtube clip is a skit from the old Australian show 'Full Frontal'. I am the little girl who gets her face painted by the man. I still remember it as clear as day and how disgruntled I was not to be the girl who received the pretty face paint. I had a little chuckle to myself when I went to sponge a boy's face and it was holding so much water that murky grey sludge trickled down his nose and lips and into his lap. Although his eyes were shut, his mortified face reminded me of my own when filming this clip all those years ago.

All in all, we achieved what we’d set out to do…and then some. We had a target of raising $1,500 as a team, which we smashed before our café even had its grand opening. Out of the seven participating teams, our team raised the most money overall, but only marginally. We managed to raise a whopping $9,349! With all the team’s funds combined, we raised over $35,000. The event coordinators were overwhelmed by the success of the event, admitting that it exceeded far beyond their expectations. It was the first time a RFL event was held on Groote Eylandt, so it was a phenomenal outcome and benchmark for future years.

Remember the old saying "If you don't have anything nice to say, don't say anything at all"?

For most children growing up in the 80s and 90s, this simple piece of advice was offered (and occasionally shouted) by depleted parents in an attempt to minimise relentless sibling bickering.

Fast-forward to 2015 and ask a primary school student the same question. I did, and less than a handful of students had a vague memory of hearing "something like that".

Despite being more 'socially connected' than ever before, young people seem less equipped to navigate themselves out of difficult social situations. Perhaps the influx of outspoken celebrities brashly insulting each other via Twitter is causing the impressionable to think this sort of behaviour is normal; entertaining even.

I can recall many a conversation with Mum about tolerating others when I was a bitchy, unsympathetic teen. "You don't have to be their best friend!" Mum would plead, "just be civil. You're never going to like everyone you meet". Although I slipped up from time to time, I'd say Mum's insightful words helped me get through high-school without getting bashed or completely shunned by vicious girl gangs.

"So, what's your point?" you may be wondering. In realising that my students were struggling to response appropriately to challenging social situations, I created a fun flow chart for them to refer to (I even laminated a pocket-sized version for them). When I introduced the chart, I told my students how I used to do lots of quizzes in magazines with the same format. E.g. Girlfriend Magazine circa 1998 'Should I cut my hair?' Somehow my genuine love of flow charts convinced them that this was the latest and greatest way to solve social dilemmas. In fact, the pocket version has even been smuggled out of the classroom for home use.

In addition to the chart, students were asked to anonymously write down three things other class members do that they consider to be annoying. After compiling their long and varied list of complaints, I invented a fictional character called 'Annoying Al'. The concept of Annoying Al was very well received and the students even rallied for him/her to become a class puppet (student's original designs pending). After discussing all of 'Al's' annoying behaviours, we practised using the flow chart to help students identify the best outcome for each scenario. I explained that the red outcomes were considered negative, as they indicted that the problem was unable to be resolved without adult intervention. Whereas, if they arrived at a green outcome, students had fixed the problem maturely and independently. The serious offenses were decided upon as a whole class; influenced by our whole school rules. 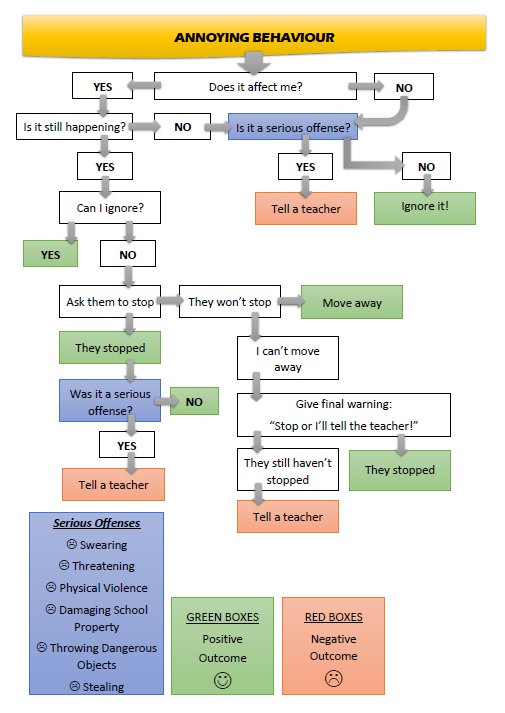 Before introducing the chart, students frequently complained to me about other students' behaviour before even asking them to stop or making them aware that it was bothersome. As the somewhat petty complaints kept flooding in, my lessons were being disrupted, and rather than learning what to say, students continually relied on me to solve their problems. Last week we spent time role playing how to ask someone to stop and what to do if they don't. Up until this point, I guess I assumed that some social skills were picked up innately over time. I now realise that when there's such a mix of cultures, I can't assume anything because my own cultural bias naturally affects my opinions. In this case, I needed to explicitly teach my students to use and listen for key words to ensure everyone could make sense of each other's wishes.

This was a valuable learning experience for me and I hope some of you find the chart useful. If you would like a large PDF version, please contact me via the form at the bottom of the page.