This term my Year 3 students are learning about different aspects of their local community and environment. They have interviewed their parents to discuss aspects of their job and are soon to be interviewing Indigenous community members to find out about their family background, working life and their opinion on manganese mining.

Most white people who live on the island work for the mining company GEMCO. It has been really interesting to unpack the makeup of the company and learn about the variety of skills and responsibilities necessary for the operation of a multi-billion dollar corporation that never sleeps. Many of my students’ parents are the heart and organs of GEMCO; they are the planners, the problem solvers and the people in charge. Despite this, up until we started this unit of work, most of my students had no idea what their parent/s actually do or had even given their unique living situation a first, let alone second thought. I’m really enjoying exposing them to the ethical and environmental issues associated with the mining process.

I thought I’d share with you some of the information I’ve been presenting and discussing with my students. It will give you a basic insight into manganese mining.

GEMCO has been mining since 1964. As they are mining on Aboriginal land, they had to get permission from the traditional land owners as well as the Australian government. They are only leasing the land, which means they are paying to use it for a period of time. GEMCO must ask for a new mining lease every 21 years but they have secured a lease for workers to live in Alyangula for 99 years. If the government or the traditional owners decide they don’t want to renew the lease when it ends, the business must shut down completely.

Manganese is a mineral sourced from an open cut mine. It lies horizontally within layers of sand and clay. It is used to make steel harder and is also used in the production of batteries. Once the manganese has been blasted and pulled from the ground, it gets crushed into small pieces and shipped all over the world. Most of the manganese is exported to Japan, South Korea, the United States and China. 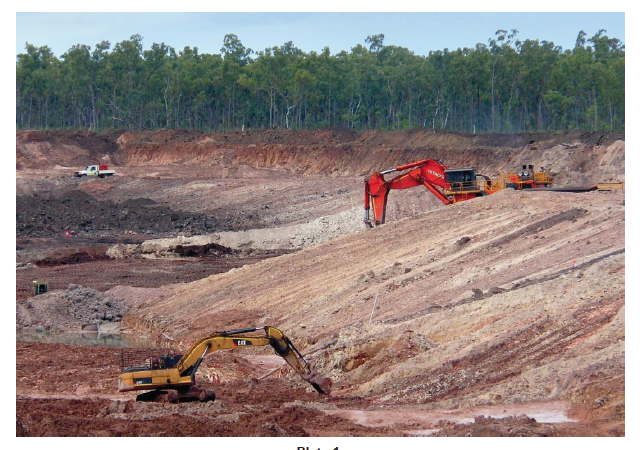 GEMCO is owned by a world-wide corporation called BHP Billiton. BHP must pay royalties to the Groote Eylandt Aboriginal Trust Fund because they are making billions of dollars by selling the manganese that’s unearthed from the Warnandilyakwan people’s land. This money is used for Aboriginal community purposes on the island. E.g. funding the Anindilyakwa Land Council.

Manganese was first discovered on Groote Eylandt in 1907 by a geologist named H. Brown. A geologist is a scientist who studies what’s in the ground.

When they first started mining the manganese, they had only planned to take enough for Australians to use. Only six months after they started to remove the ore from the ground, other countries such as Japan wanted the manganese too. They were willing to pay a lot of money for it, so the mine started operating day and night to keep up with the great demand. 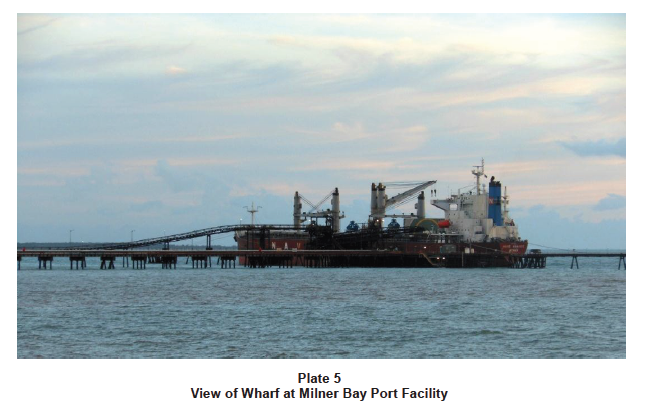 There are six main processes the ore must go through before it can be sold and shipped out. These are:
-       - Crushing large bits of ore into smaller pieces
-       - Washing & checking the size of the ore
-       - Tumbling the ore with water to remove any clay
-       - Removing and discarding floating non-manganese materials (manganese sinks which makes it easy to separate)
-       - Checking the ore’s density and sorting it into piles to be crushed
-       - Crushing the ore into fine pieces. The size will depend on what it’s going to be made into. 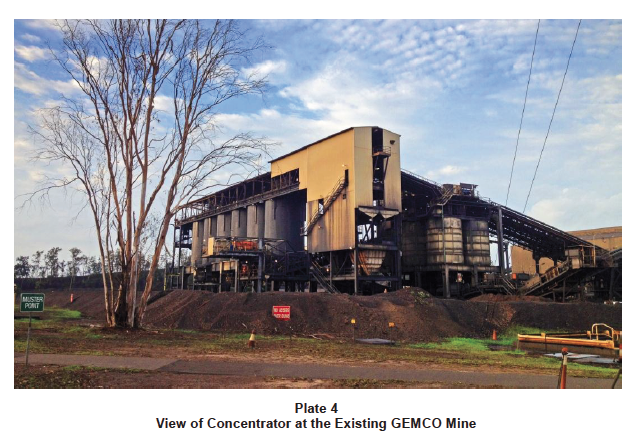 As large machines do most of the manual work, people who are employed by GEMCO have lots of different skills and work together to ensure everyone’s safety while making the most money they possibly can. GEMCO employ people who specialise in science, engineering, business, technology and environmental control.

The job of a GEMCO engineer is to plan new towns, dams, roads, tunnels and underground electrical work. They also look for new ways to speed up the mining process while trying to reduce its impact on the environment.

People who work for GEMCO may be in charge of operating big machinery. Just some of the machines people operate are drills, shovels, bulldozers, haulage trucks and crushers at ore processing plant.

Part of GEMCO’s mining agreement with the land owners is to rehabilitate the land once they have dug up the manganese. This means they return it to how it looked before by planting seedlings for new trees to grow. This job is often done by Indigenous workers. About 6% of GEMCO’s work force are Indigenous*. 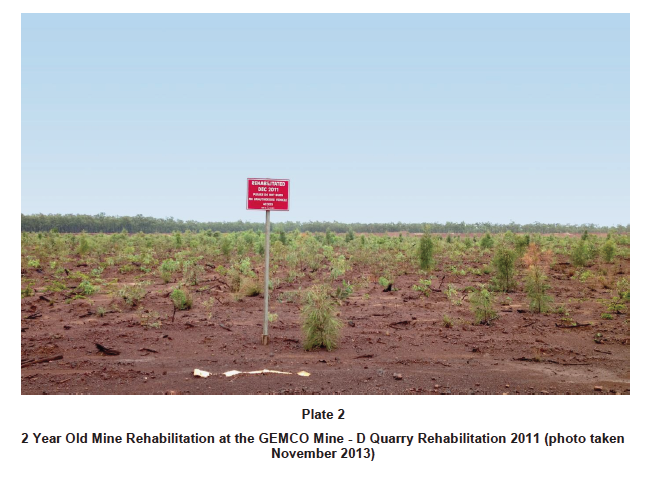 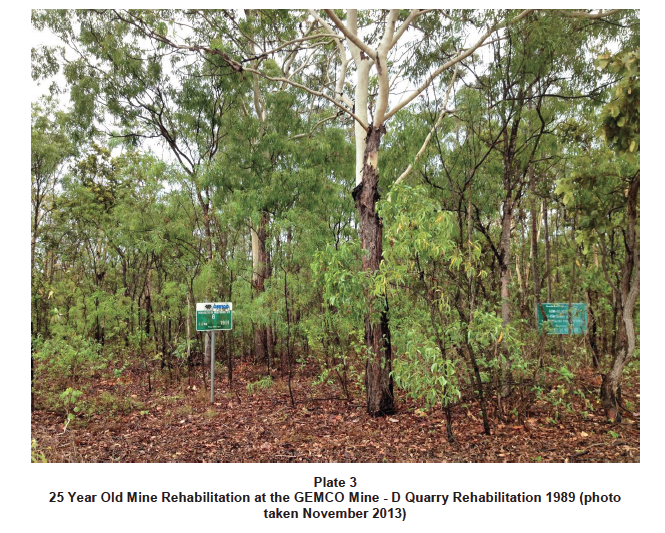 GEMCO currently has a workforce of approximately 1,000 people. Many of the workers live in either Darwin or Cairns and fly onto the island to work for seven days straight. They are known as FIFO because they fly in and fly out to work. The FIFO workers must work both day and night shifts to make sure the plant is running 24 hours a day, seven days a week. There are more FIFO workers employed during the dry season, however the plant still operates during the wet and some people are even expected to work on Christmas Day! Most of the GEMCO workers who live on island hold very important jobs and without them the mine could not function as well as it does.

Here is a map of the mining operation. We live in Alyangula; about a 15-minute drive to the main GEMCO facility. On weekends we can often hear and feel the mine blasts which are occurring close to the airport. 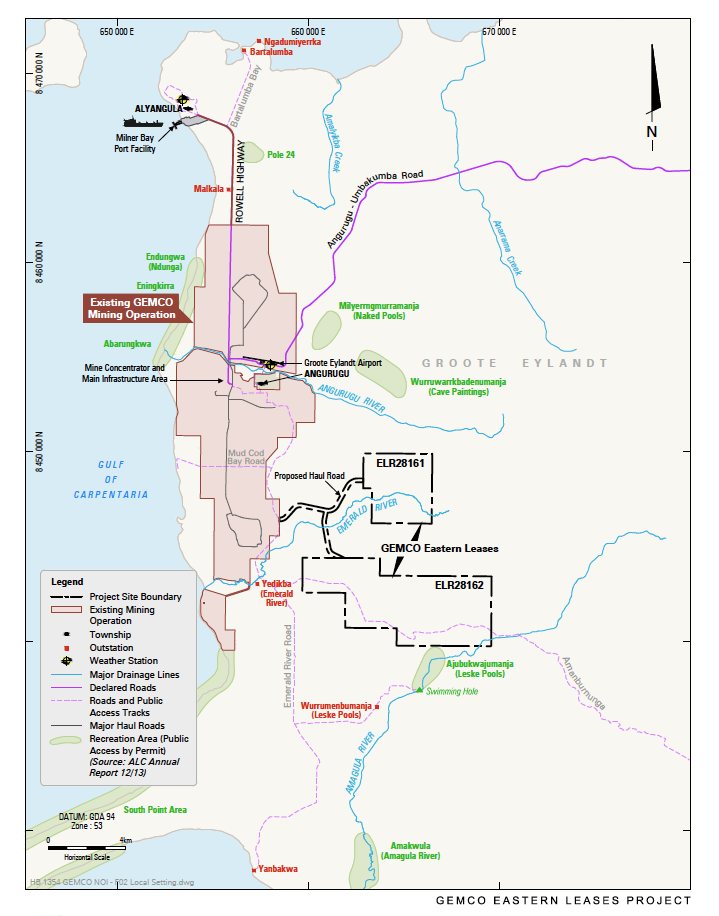