The Reality of Working in a Remote Community

Below is an article by Kim Mahood published in Griffith REVIEW Edition 36: What is Australia For?

Please note that I have significantly altered the length of the article and therefore not all ideas put forward by Mahood are represented in this version. In some cases I've slightly altered sentences for ease of interpretation or to sum up long winded explanations. I've enclosed my additions in brackets and highlighted key ideas in bold for those of you that prefer skimming. If you would like to read the full piece, click on link below the article.

Contaminated ground, too hard, no career path, a bureaucratic nightmare, a cultural minefield; a recalcitrant and ungrateful Indigenous population who want what whitefellas have but don't want to do what whitefellas do, who define their Aboriginality against the whitefella presence in their midst. In an environment that calls for the best and brightest too often it's the sociopaths, the self-righteous, the bleeding hearts and the morally ambiguous that apply for and get the jobs, and provide the example of white society against which the local people formulate their resistance.

[Whilst the white people are at loss for new 'solutions'], the local people carry on with their own preoccupations, assessing how best to utilise and exploit the current situation, taking the measure of this new batch of kartiya who for brief or extended periods will control the resources of their world. Kartiya are unpredictable and unreliable. Even the best of them make promises they don't keep. It is necessary to extract the maximum value from them while you can, because tomorrow or next week or next year they will be gone, and there will be a whole lot of new ones to break in.

Getting Crafty During My Visit to Darwin

Well as it turns out, Darwin wasn't all that bad!

The old motto 'life is what you make it' really rang true for me this week; as I really did 'make' a lot. I made numerous new friends, I made myself sick with copious amounts of ice-cream, I made a bag out of a palm frond and I made a permanent mark on a wall in Cavenagh St in the city.


Not long after publishing my previous post about Darwin, I made a conscious decision to see the free trip for what it was worth (errr...free that is!) and try to enjoy what Darwin has to offer; misfits, backpackers and all!
Below you can see a collection of photos from my week. I've also listed some general info and recommendations for those considering a holiday in Darwin.
Things to see & do:
Oh! And as for the 4WD course, it was a huge let down. We sat in a fumy shipping container doing theory work for a great deal of the morning, causing us to run severely short of time during the practical component. Positives: I learnt to use a jack, change a tire and come to a dead-stop whilst going in excess of 80km per hour. Negatives: I only got to witness how to use a snatch strap to pull someone out of a bogging (which involves two cars), so Adrian and I are still none the wiser when we get bogged on our own. Also to my disappointment, we only got to drive through one shallow body of water due to the lack of rain lately. The instructors were friendly and accomodating, however I wouldn't recommend the course (run by Top End Training in Palmerston)

First Thoughts Upon Arriving in Darwin 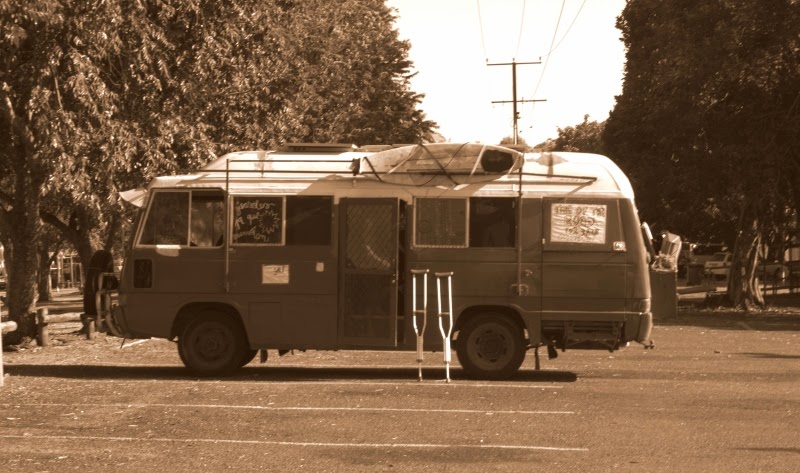 I'm in Darwin this week attending an orientation program for new teachers working in the Northern Territory. The only part worth mentioning is my compulsory participation in a 4WD defensive driving course in Palmerston (45 mins from Darwin). This is going down at 7:15am tomorrow- stay posted for potential video footage if I make it out alive or my feeble arms don’t snap whilst trying to change a tyre.

Quite generously the department flew me over here two days early, so I've spent my time wandering the streets of Darwin City and touring the surrounding areas. I don’t have much to say about Darwin to be completely honest. It’s a lot like Cairns. The streets are set out in a block formation, with most of the action being contained to two long strips a few streets back from the water. The pubs, cafes and supermarket (practically everywhere really) is plagued by 20-something year old sun-kissed backpackers (yes I’m aware that two or so years ago I would’ve been in my element). Whilst the restaurants are buzzing on weekdays and look pretty trendy, none have particularly taken my fancy which has led me to cook dinners in my very under-equip kitchenette. Majority of the restaurants serve Asian or Indian cuisine and scattered amongst them is the typical Aussie pub or fast food outlet.

If I discover any redeemable aspects in or around Darwin City, I’ll be sure to let you know. But as it stands, I rate Darwin as a holiday destination 2 out of 5 stars at best.

I’d be interested to hear others’ thoughts and experiences of Darwin, so please feel free to comment or add your own star rating by commenting below.