Learning to Fish With a Hand Reel on Groote Eylandt


A few weeks ago, a group of Indigenous girls showed me how they catch fish by crushing up small live shells and attaching the gooey flesh to basic hand lines. I was amazed by their success rate in catching decent-sized fish using what seemed like such a simple method, and decided to put my new knowledge into practise over the long weekend while camping at Marble Bay. I can now proudly announce that I am a successful hunter of the deep! 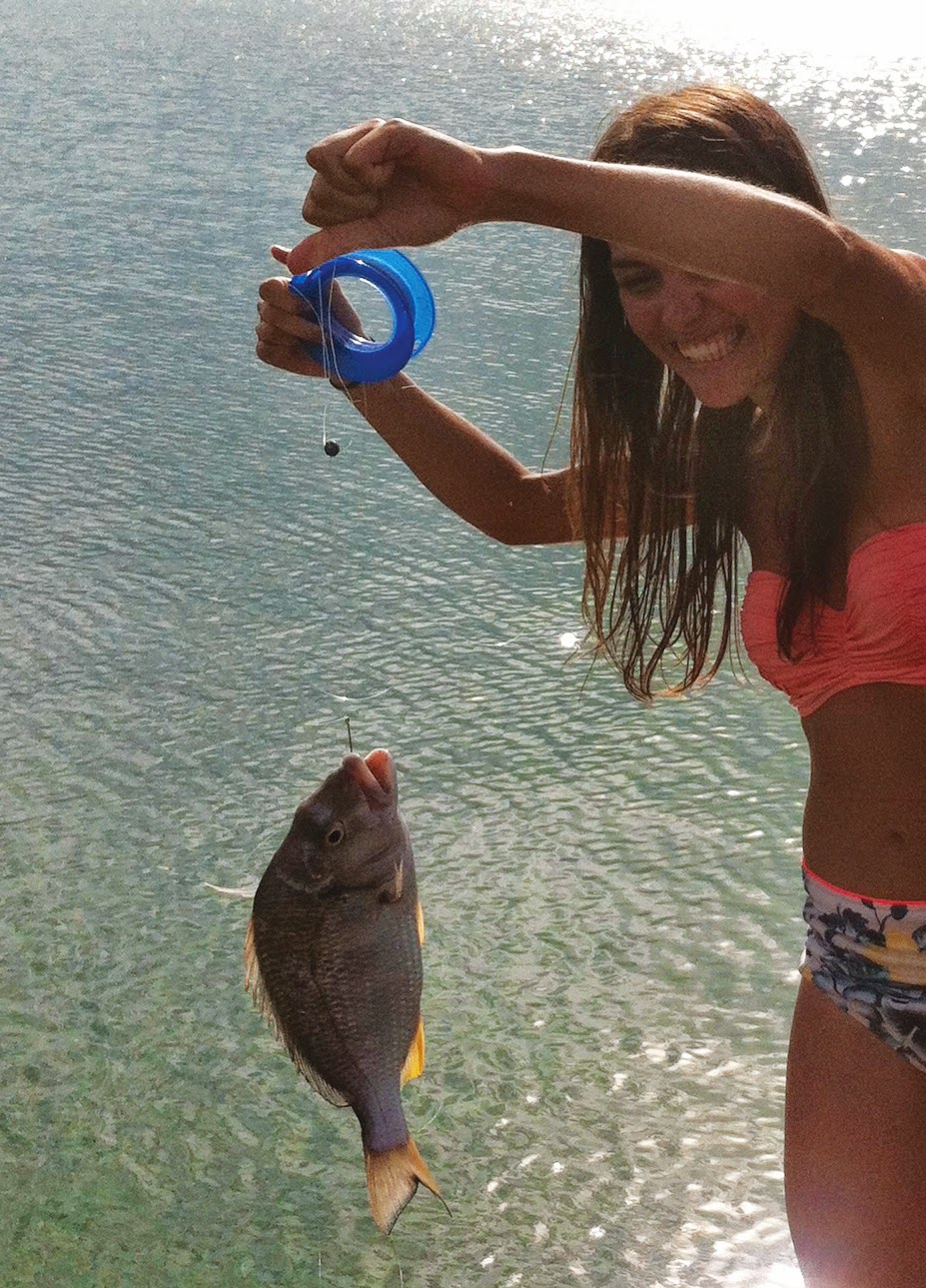 I caught a countless amount of small coral fish; some of which involuntarily became bait, but most returned to the sea after being woman-handled (much worse off than man-handled in this scenario) and sporting a new lip-piercing. After about an hour of playing catch and release, dinner finally attached itself to my line. Before I could even let out a girlish squeal, I had a 20cm bream flapping around my feet and line-burn on my poor little pinkie to prove that I, carer of two hungry boys (one slightly more hairy than the other), could deliver fish straight from the sea to their sandy plates, the way nature had intended.
Upon asking the Indigenous girls who would gut the fish before cooking it, their natural response was to laugh, as if it weren’t a serious question. As I carried my haul back to the camp site, their playful mockery revisited my mind. Surely if I could catch and kill my own dinner by bashing its skull with an axe head (apparently far less inhuman than letting it take its’ last gasp of air), I could cook it guts n’ all? Of course I could! In fact, we picked away at its’ charcoaled carcass like hungry savages, mistaking innards for flesh and pulling pin bones and scales from our teeth. “If only we had packed a lemon!” I sighed, as though I should have pre-empted my fishing success.
The following day we met up with the couple from Umbakumba again, who happened to be camping with our newly acquainted Indigenous friends. Anna* clapped in excitement when I told her about my fishing experience, visibly thrilled that she had imparted her knowledge onto balanda (white person/s). It wasn’t long before her attention switched back to the reason they were stopped by the side of the dirt path; they were collecting sugar-bag honey. They explained with excitement that whilst driving along, they had noticed a small hole produced by bees high up in a eucalypt tree. They chopped it down and split open the branch to drain out a cup-worth of the eucalyptus-infused honey. Adrian and I suck our finger into a hole where the honey pooled. We both commented on how thin the texture was in comparison to the store-bought stuff. Anna pointed out the singless bees which are only 4mm in length and entirely black in colour. We were dumbfounded that they even managed to spot the small hole, as to us balanda, it just looked like any other imperfection seen on every second tree within a 10-kilometre radius. “They’re just amazing, the way they notice things!” exclaimed Deb, who finds herself blown away by their knowledge of the land every time she’s within their company. As Adrian and I headed home, I spent the 120km drive with my head out the window trying to distinguish the difference between a bee hole, a termite hole and a natural burl formed in the tree. Adrian and I joked that until I find my own sugar-bag, I can only consider myself ‘low-level’ in the mastery of hunter gatherer. 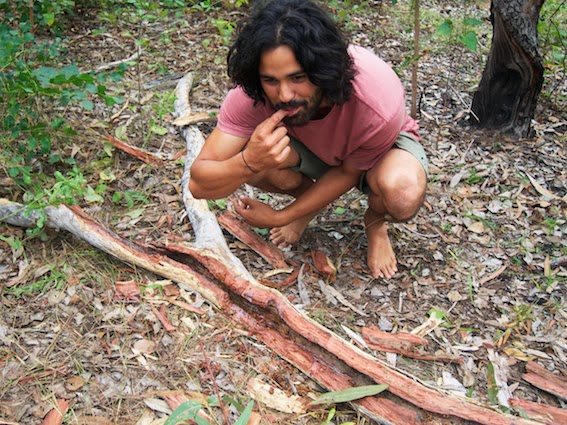 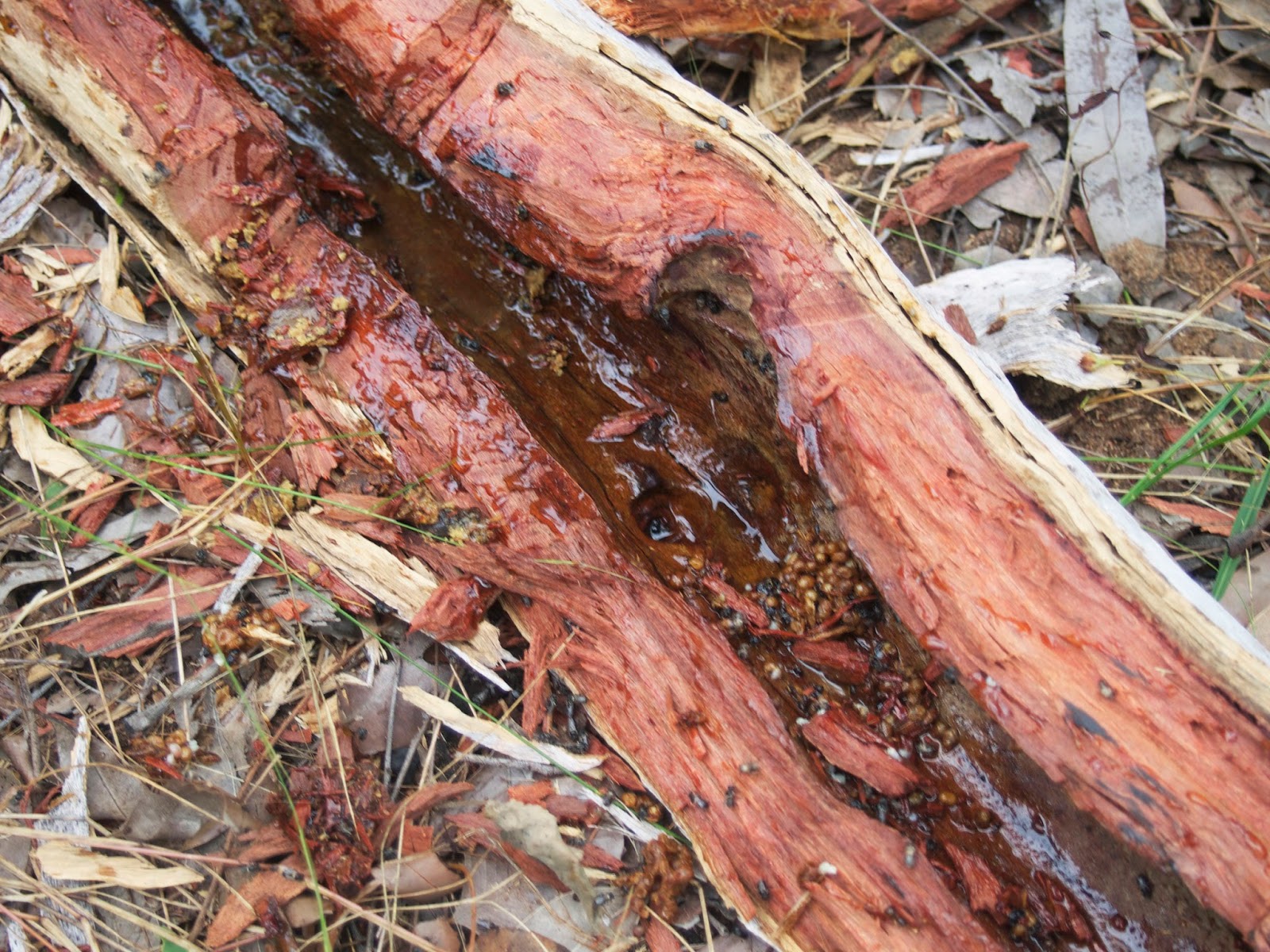