Turtle Hunting With Our Aboriginal Friends on Groote Eylandt

Days before arriving on island, I found myself endlessly day-dreaming about what my new life in the NT might be like. I’d excitedly dream up scenarios where I’d find myself immersed in Indigenous culture. Most commonly, I’d picture myself sitting cross-legged in the dirt, listening intently, as an Indigenous elder would devotedly tell dreaming stories or teach me interesting things about the land. On other occasions she’d invite me to join her on a bare-foot bush walk to gather various berries and teach me which ones could poison the ignorant white man. We’d head back just before dark and wait for the men to return with speared fish and turtle to accompany our bush tucker and we’d all sit around the camp fire laughing and sharing new and common foods together.
I didn’t share these dreams with anyone, because I knew that that’s exactly what they were…dreams. To soften my impending disappointment, I’d always conclude my conjured up stories by giving a long inaudible sigh, followed by a drawn out ‘if onlyyyyyy’ said to myself with wavering optimism.
During the weekend, these dreams came closer to reality than I realistically thought possible (or dare I say, my dreams were exceeded by what I actually witnessed). Adrian and I were once again invited to go camping with Deb and John* and the Indigenous mob from Umbakumba. This time, the mob of 10 ranged in age from two to 60 odd. As we pulled up behind the convoy of 4x4s, the mob smiled warmly as they waved out the windows of their crowded Troopy. Deb and John had invited a friend called Jen* and we had packed Wilson as croc bait (or at least that’s what I tell Adrian to wind him up). ‘That’s a lot of people around a camp fire,’ I thought, whilst cursing myself for conservatively buying one small pack of marshmallows.
We were headed for a place called Red Sands. Receiving its name for obvious reasons, the coastal area is a spectacular sight to see. Unfortunately for most non-Indigenous island residents, they never will get the chance; as they must be invited onto the land by an Indigenous person or receive written permission from the traditional owner. We are extremely lucky to have bumped into Deb and John that day at Leskie Pools. If we hadn't, we'd probably be spending our weekends swimming at the same water hole along with all the other residents of Alyangula. It’s only through the couples ongoing work with the community that has allowed them to build such strong relationships with the Indigenous folk and giving them privalged access into their world. Sadly, most non-Indigenous people on island have little or no contact with the Indigenous community; despite some of them living here for over a decade. The Indigenous people tend to keep to themselves; which is why we feel so previlaged to not only accompany them on these trips, but for them to share so much of their knowledge and time with us. 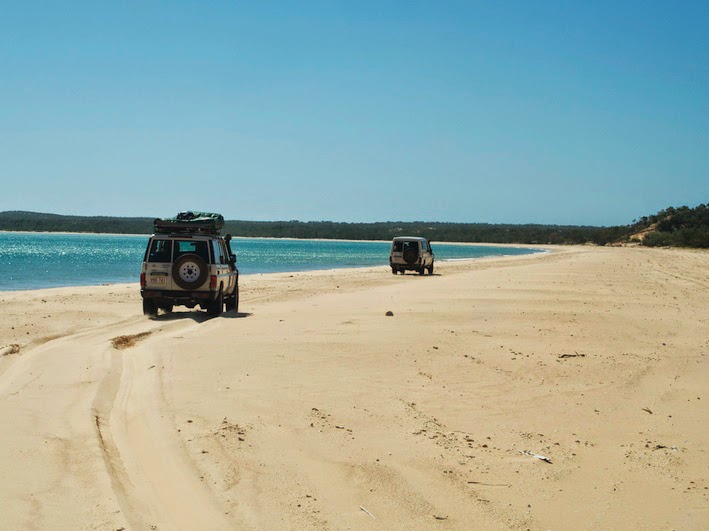 Coming into view of the powdery red dunes was a highlight of the trip. For a few minutes we only communicated through sounds of admiration. ‘Wow’ I said. ‘Woah’, Adrian responded. ‘Ooo…’ I cooed, before eventually gushing ‘awe-some!’ emphasising the ‘awe’ with child-like enthusiasm. With that, we stopped the car and took turns to climb the hill and roll down it in an equally child-like fashion. 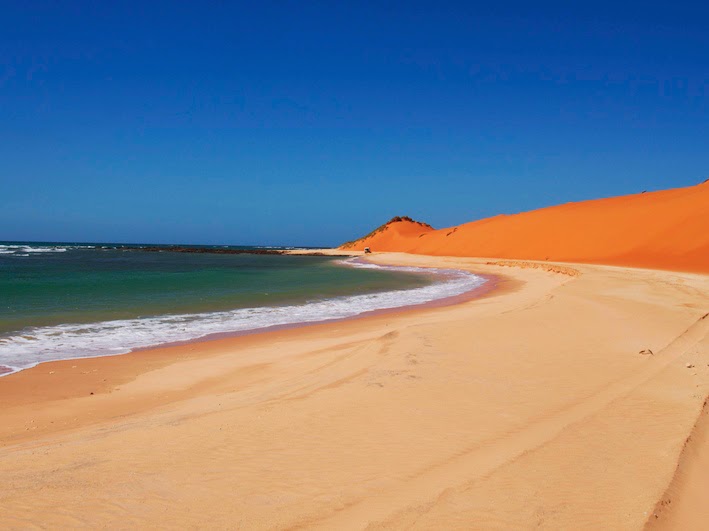 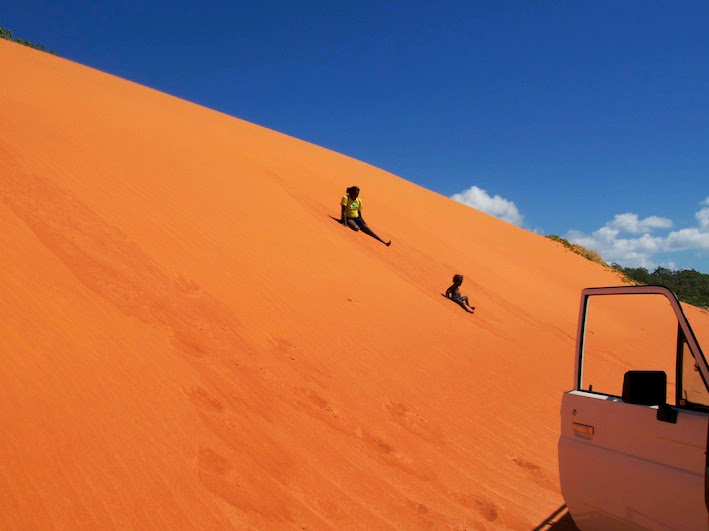 From the moment we arrived at Red Sands, the mob were like energetic school kids; keen to show us all ‘the cool stuff they had found’. We were lead this way and that, by adult and child alike, all hands excitedly ushering us to ‘come look’ at various aspects of the land and its animals. Whilst driving along, David spotted some worn out turtle tracks leading up onto the sand. Everyone got out and the men began poking sticks into the ground, searching for soft sand which indicated buried eggs. They’d smell the end of the stick to check whether they’d busted an egg, as they explained that sometimes the sand can become compacted over the 3-month nesting period and it’s difficult to feel whether they’ve hit the right spot. It wasn’t long before the children squealed and David was tossing ping-pong like balls out of a hole by the handful. There had to be roughly 20 or so white, sand-covered balls. As I picked one up, it concaved in my fingertips and I inhaled sharply as I thought I’d busted it. Everyone must have been watching my reaction, as they begun to assure me that I hadn’t and that these eggs weren’t like bird eggs. Later I found out that this was true in every way. After finding two nests worth and boiling them in a giant billy, they offered me one to taste. I took their lead as I watched them bite it open with their teeth and suck out the yolk. I sucked on the opening for no more than a second before I was hit with an overwhelming saltiness. The best way I can describe it is like drinking the raw yolk of a chook’s egg but with the flavour of 10 yolks combined; along with an injection of smoked salmon which has been twice encrusted in sea salt flakes. As the turtle egg is so highly regarded by the Indigenous people, they automatically assume we would love it. After one suck and a drawn out ‘mmmmm’, all eyes were thankfully off me. Although it really wasn’t all that bad, it was far from enjoyable and I needed to rid of it inconspicuously. I threw it to Wilson and he happily destroyed the evidence of wastage-shell and all! 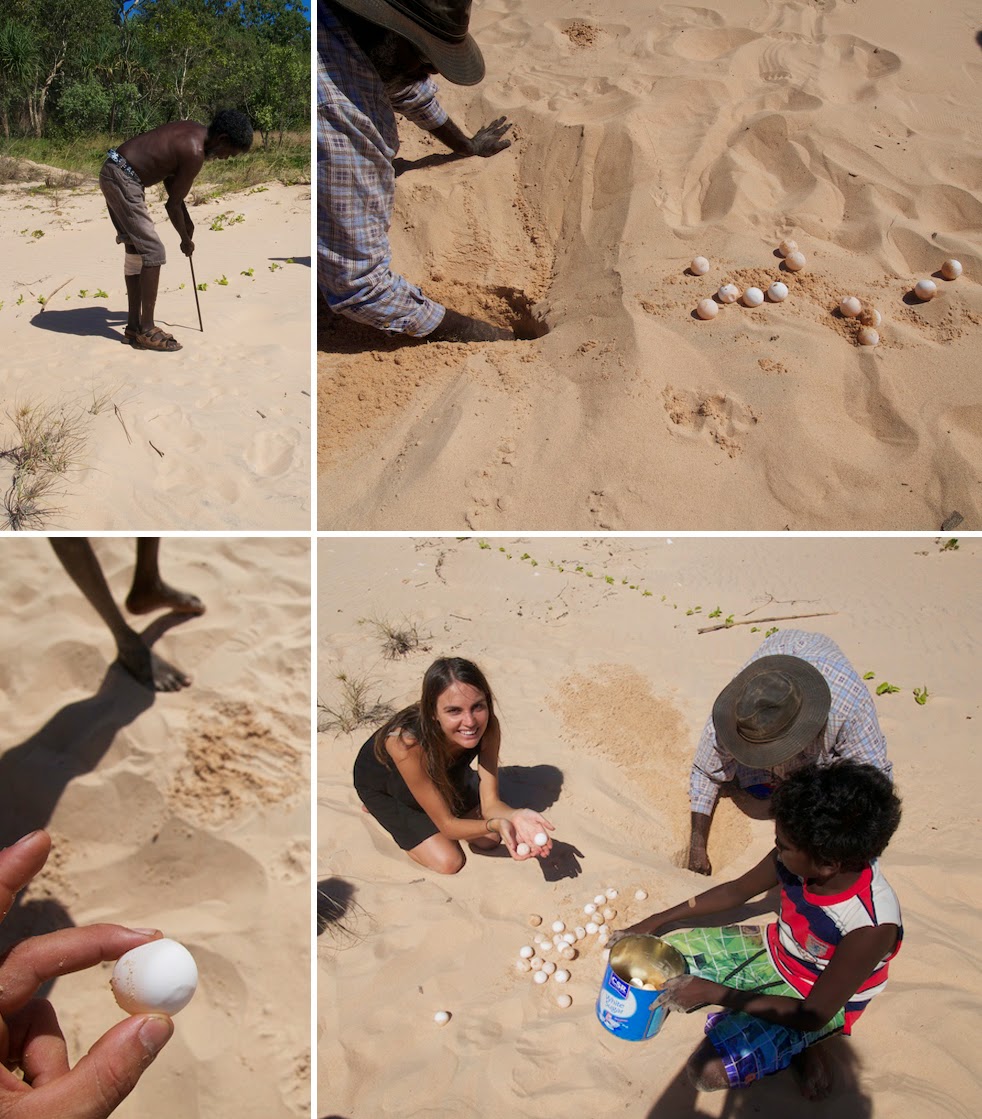 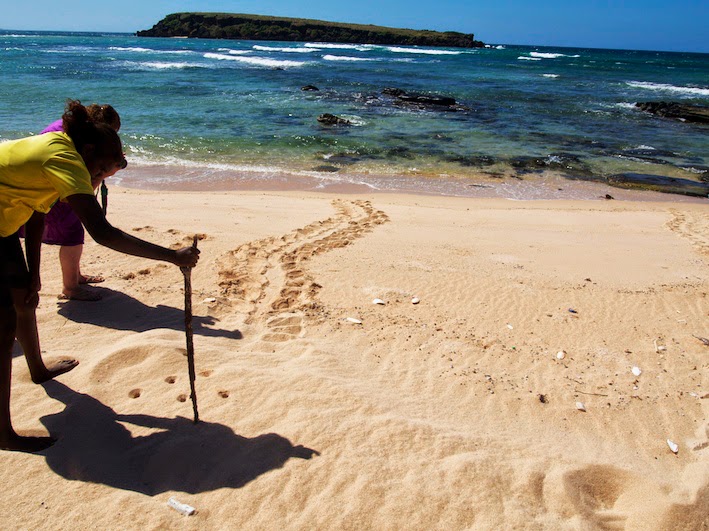 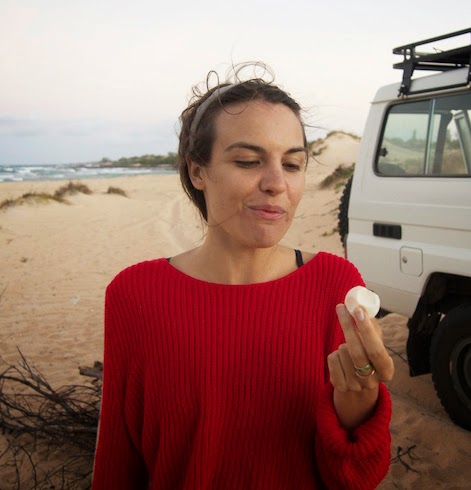 When the sun went down, we went ‘hunting for turtle’. As we walked along the shore with our torches, Anna* assured me that we would find turtle tonight, as they had asked the land to provide it. Whilst she didn’t go into great detail, she said something along the lines of ‘we ask the land for food and promise that in return we will care for it’. The land must have gotten confused with the agreement as it did in-fact provide us with a ginormous turtle, however it was not of the eating variety. David explained that there are three types of turtle on the island; two of which can be hunted by Indigenous people legally. He wasn’t able to tell me the species name, as he only distinguishes them by appearance. When Anna had caught and rope-tied the 50kg turtle by its flipper, she ran to get David to ask him whether it was good for eating. As soon as Anna and I flipped in onto its belly, David ordered Anna to cut it free and said that it’s neck and shell were ‘not right.’ There was much commotion in the darkness as Wilson had come to check out what all the fuss was about. He kept a distance whilst barking at the turtle as it heaved its body through the plastic-littered sand. It was heading away from the shore and David suggested it may be looking for a spot to lay its eggs. It was clearly tired from the struggle as it breathed deeply like a heavy smoker. We walked back to camp as if we hadn’t just witnesses something completely foreign to us. I quizzed David about his knowledge of turtles and Adrian walked ahead with Anna, discussing something unrelated. Back at camp when Adrian and I were alone, Adrian couldn’t help but comment on the whole turtle hunting saga. I guess you could say we are of opposing views. Debating whether or not turtle hunting should be legal, is ethical etc. etc. can be left for another day, but I will say what I said to Adrian in defence of this old Indigenous tradition. We kill a lot of animals (farmed for consumption or otherwise,) and just because non-Indigenous groups may deem turtles to be superior to cows, chickens or fish, for whatever the reason (age, mass, appearance), I don’t believe it’s our right to tell them they cannot hunt it, purely because we don’t wish to eat it ourselves. Especially after watching them release the turtle for being ‘the wrong one’, I feel even more strongly that they are entitled to continue this very old tradition. 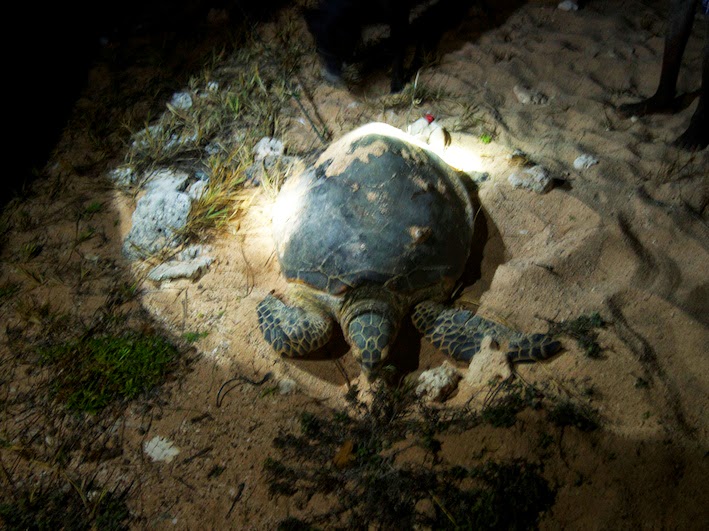 Although we walked back to camp turtleless, the mob had brought a bag of turtle meat with them, just in case the land wasn’t willing to share. The next day they cooked it up on a frypan and shared it around. Adrian and I had gone off wandering the beach for shells at this point and missed the opportunity-damn! Wilson apparently ate his fair share which led us to joke on the way home that even our dog was more cultured than us. 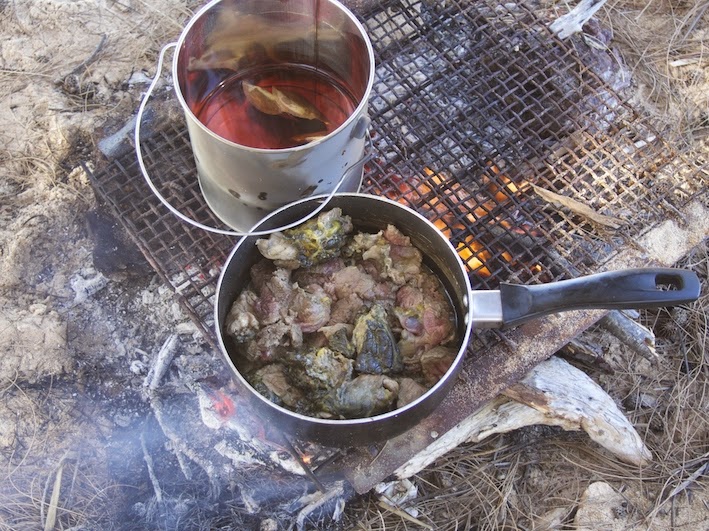 Whilst waiting for the mob to haul all their belongings back into the Troopy, I bathed myself in the warm of morning sun. Although a turtle shell may seem like an unlikely pillow, it served as a wind block and I actually fell asleep within minutes. When I awoke, I was told we were off to the shell graveyard. ‘Woohoo! More dead things,’ I said gleefully, thinking of the creative possibilities. 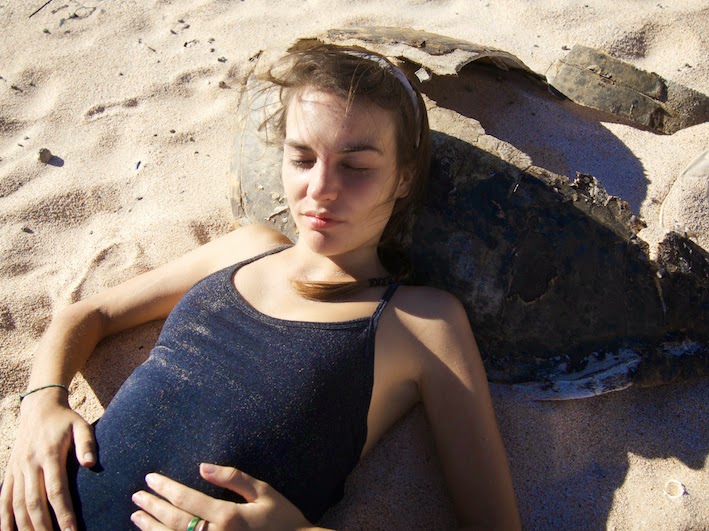 The shell graveyard is an endless pile of shells that has accumulated over hundreds of years. Spanning 10 or so metres along the shore line is a volcanic rock shelf with perfectly circular pits resembling inverted pipe work. As the tide slams against the shelf, the pits spray out water and fling the empty, glossy shells atop the chipped and faded corpses that once looked vibrant and appealing. Nestled amongst the dusty, dry heap are small stones that the Indigenous people refer to as dreaming stones. Not much bigger than a fingernail, these often triangular shaped rocks are embedded with stripes or clustered circles, giving them a mystical quality. The mob spent over an hour seeking one dreaming stone in particular; the dragon stone. White and speckled in appearance, the story associated with the stone involves a mystical sea dragon and her eggs; however Adrian and I only caught the end of David’s explanation and I wouldn’t be doing it justice if I attempted to explain it further. I’ll ask David next time we meet and include it in a future post. I’ll also be editing some video footage taken from the weekend to post on the blog within the week. It includes footage of when we discovered the turtle eggs and I give a short review after tasting the egg. Please check back shortly, or better still, subscribe to have new posts sent directly to your email address (see top, right-hand side of this post). 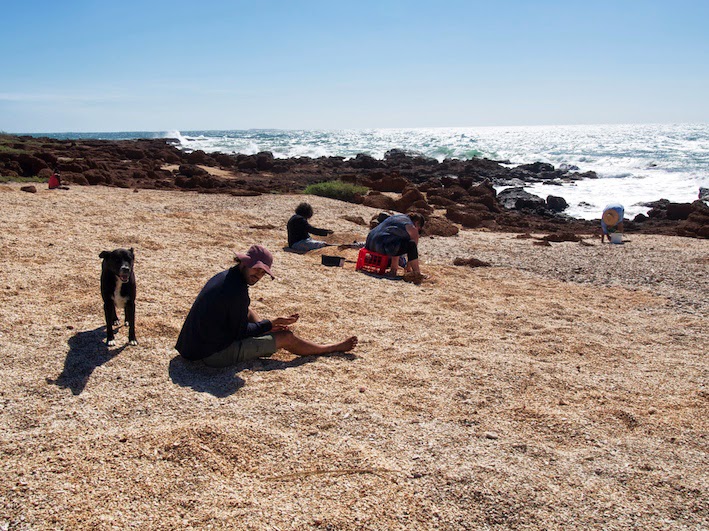