The First Time We Got the Troopy Bogged on Groote Eylandt

Apologies for the recent lack of blog posts. It is currently school report writing season; a time when trying to maintain a healthy work/life balance is in no way possible and even sitting down to watch the news for 10 minutes is regarded as a waste of precious time.

Having said this, I have had the opportunity to escape to a place called Picnic Beach on two occasions. The first time, Adrian and I went on our own with absolutely no knowledge of the area or just what we were in for. The second time, we went with a mature-aged couple who Adrian vaguely knew from back home in Bega, NSW  (we just  happened to be swimming in the same river as them a week earlier) and a car load of Indigenous people who work with them in Umbakumba; one of which is a traditional land owner.
In this post I will share with you a recount written by Adrian the day after our first adventure. In a post that will shortly follow, I will tell you about our vastly different experience at Picnic Beach the second time around when accompanied by a group of Indigenous locals.  Please check back soon as I will hopefully share this within the next few days. 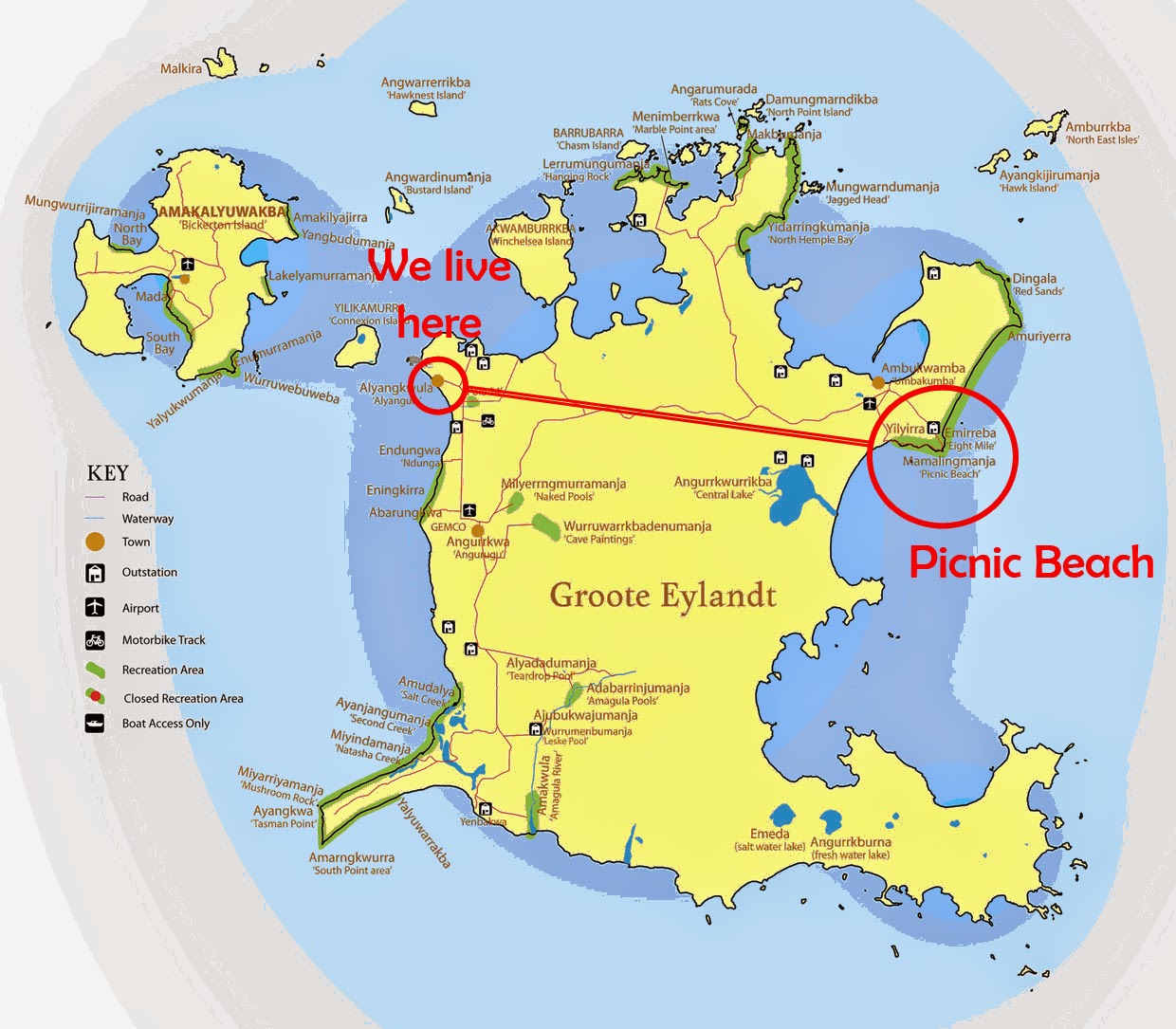 Water bottles? Check. Fishing rods? Check. Land permits? Check. We slid the freshly printed plastic cards into our wallets and told Willy (our black lab) he wasn't welcome this time round. It'd just gone lunch time and we were in high hopes of seeing something special, just the two of us.

We plotted our course for Umbakumba on the north eastern side of the island about 40 minutes from home. After passing the airport and driving through the low-level water crossing, the road straightened out and we watched the roadside flora gradually shift from rainforest to low-level eucalyptus forest struggling to gain nutrients in the sandstone soils. Before European settlement, I imagine the whole island would have been in abundance with earthy trunks and woody branches.

We slowly rolled into Umbakumba, going the designated 40km/h. Driving through the open streets, it seemed as though Gemco's maintenance budget mustn't have spanned beyond Alyangula. I imagine that if it weren't for the abundance of Gemco miners, Alyangula would be as basic and tired looking as this small town.

Umbakumba’s residents are mostly Indigenous folk, with only a hand full of white fellas who work in the community living in similar houses scattered around. The town has one very basic food store (with prices even higher than Alyangula), a Centrelink office and a school resembling a jail with steel roller doors to prevent break ins and vandalism. After a few minutes, we decided that we’d seen enough and consulted our one and only poorly illustrated map on how to reach Mamalingmanja (Picnic Beach).

Whilst Casey combed the beach happily, I quickly explored the area hoping to find an easier exit. With no luck, I hurried Casey along and we agreed to come back again soon; perhaps with some friends to save us from the stressful ordeal we’d found ourselves in. 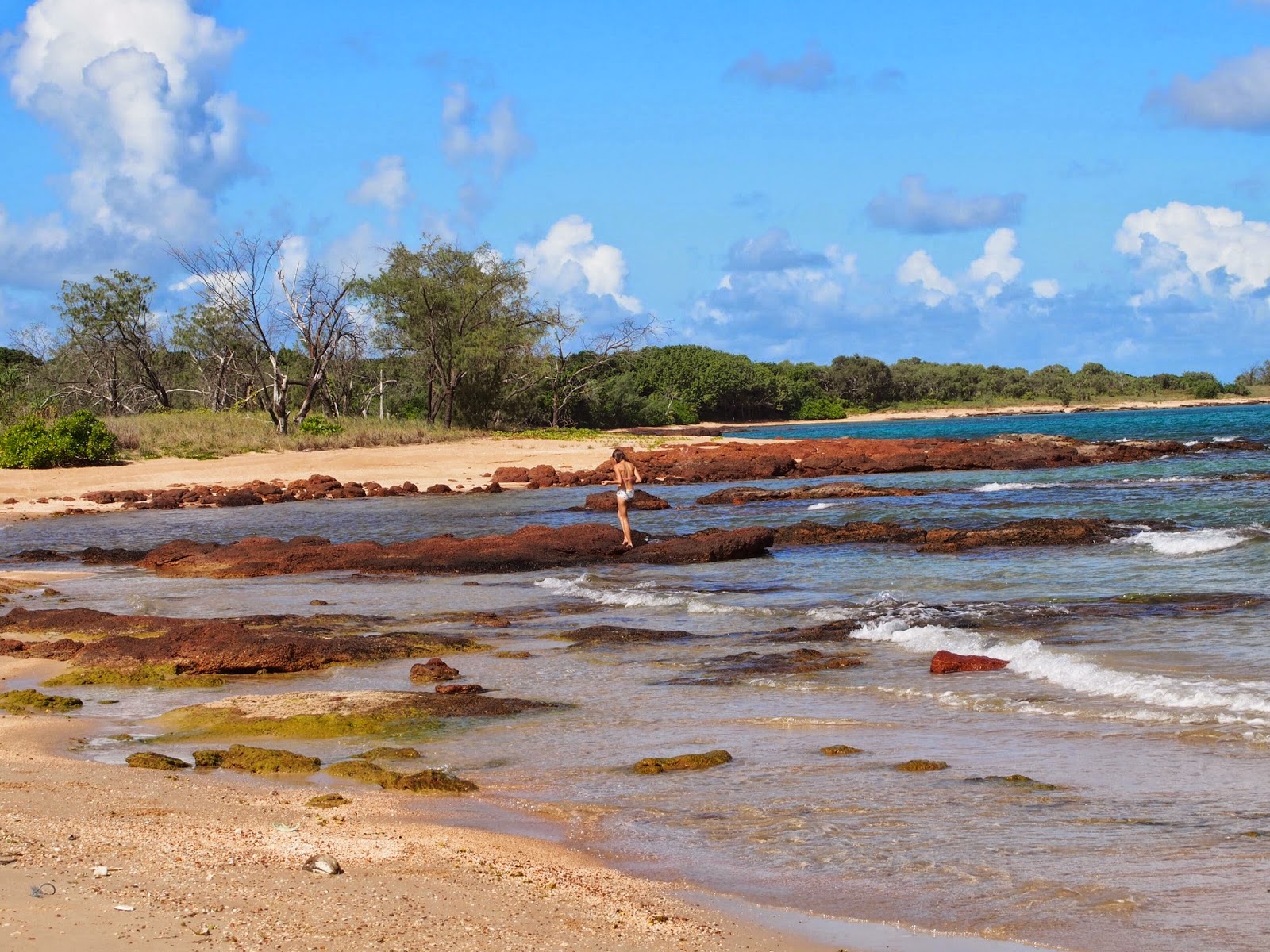 This time there was no laughter or jokes as I started the car up. We both kept our faces forward as I drove towards the timber slats. I started to gain speed as soon as I could, preparing my wheels for the sandy climb. I gave it all it’s got and started charging through the sand like a runaway camel. I was gripping the wheel with all my strength whilst watching the sand fly out from my front arches. I felt like I should be yelling out words of encouragement like “Come on, you can do it!” Instead I remained quiet, and focused on keeping my foot flat to the floor.
We made it. I almost felt as though I shouldn’t have doubted my car’s capabilities once more, putting our previous experience down to ‘back luck’. We began to loosen up and the laughter and jokes started once more as we headed for home.
- May 23, 2014 No comments:
Email ThisBlogThis!Share to TwitterShare to FacebookShare to Pinterest
Labels: australian beaches, bogged, camping in NT, crocodiles, four-wheel driving, groote eylandt, northern territory, picinic beach, shells, umbakumba
Newer Posts Older Posts Home
Subscribe to: Posts (Atom)